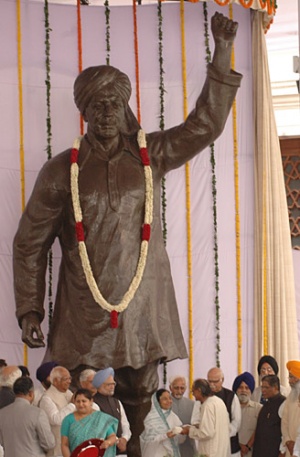 Its been nearly 80 years since Bhagat Singh dropped a small bomb onto the floor of Parliament House's Central Assembly Hall to “make the deaf hear”. Today, to celebrate India's day of Independence, a cause to which Bhagat Singh had dedicated his life, the larger than life statue (18 feet/6 metres high) was unveiled by the President of India, Pratibha Patil, to a long deserved welcome.

Relatives of the Martyr, his nephews Kiranjit Singh, Abhay Sandhu, Zorawar Singh and his niece Verinder Sandhu, were the special guests for the day, as many of the country's top leaders gathered to honor the freedom fighter, including Vice President Hamid Ansari, Prime Minister Manmohan Singh, the Lok Sabha Speaker Somnath Chatterjee, UPA Chairperson Sonia Gandhi and Leader of the Opposition L K Advani and some Union Ministers and MPs.

The statue of the Sikh Shaheed (martyr) surprised some as the photo and film images depicting him, now famous around the world, have never depicted him wearing a turban which earlier photos show him wearing. Well known as an atheist and a communist he made his escape sporting a well trimmed moustache and a western hat, but the lesser known story, is that after coming in contact with Bhai Sahib Randhir Singh, another Gadhar party activist and a revolutionary, Bhagat Singh grew his hair and also wished to be initiated into the Khalsa Panth.

However, due to his death sentence approaching, the British Government did not comply with the requests of Bhagat Singh to be baptized. One learns from historical records that as Bhagat Singh’s execution grew closer; he started adopting a strict routine as a practising Sikh. In the last last months of his life he had started growing his kesh (hair) and reconnecting with the religion of his childhood.

In fact the last picture of him taken in prison, shortly before his death, reminds one of the paintings of Bhai Mani Singh Shaheed who with his turban removed is shown with the same top knot, in which Sikhs traditionally tie their hair, before wrapping their turban.

Some in the media jumped at the chance to cause some controversy suggesting that the martyr should have been shown with a hat instead of a turban as he was universally known for his European hat and moustache. Among those who led this line of thought was Jagmohan Singh, a nephew of the martyr. 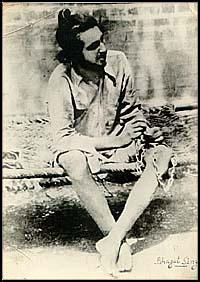 Section of the one photograph of Bhagat Singh taken in Lahore jail. Many paintings have been made based on the actual photo. A clearer color tinted photo also exists.

The Communist Party of India-Marxist (CPM) was notably absent on the day that many thought should have come many years before. Kiranjit Singh, son of the Bhagat’s brother Kultar Singh said:

“This, for us, is a historic moment that marks a grand repetition of history after 80 years when Bhagat Singh first entered Parliament. We would have loved to see this day arrive earlier than 61 years of freedom. But that does not take away from it the happiness we feel. We were, however, hoping to see CPM MPs around. They were part of the movement that ensured Bhagat Singh his rightful place in the Parliament.” (Quote thanks to Punjab Heritage News)

The Bhagat's niece Verinder gave a special thanks to sports minister M.S. Gill for his work in having the statue become a reality. It was Gill who first proposed the statue to celebrate the 100th birthday of Bhagat Singh. Gill also fought to ensure that the statue would include a turban instead of the hat, which he only donned twice in his life as a disguise.

“Today I feel seven feet tall. For me, this is much more than winning an Olympic gold. Bhagat Singh is special to the youth of India, and he lives in each one of our hearts,” Gill said. (Quote thanks to Punjab Heritage News)

The statue, was sculpted by the renowned artist Ram V Sutar, who earlier sculpted the Mahatma Gandhi statue (in front of Parliament House gate No. 1) and the Ranjit Singh statue (in Amritsar’s Ram Bagh). The statue now shares space in courtyard no. 5 with those of Indira Gandhi and another fighter for India's freedom, Subhash Chandra Bose a contemporary of Bhagat Singh's father Kishen Singh Sinhu and his more famous uncle Sardar Ajit Singh who were role models for the young Bhagat.

Nawanshahr, District has had its name changed to honor Shaheed Bhagat Singh