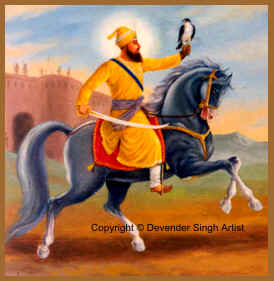 Battle of Bhangani was the first battle fought by Guru Gobind Singh with hill Chieftains. Guru Gobind Singh ji was 20 of age when he fought this battle. The battle of Bhangani took place in October 1686, six miles north of the town Poanta, This was the culmination of the jealousies of the hill chieftains led by Raja Bhim Chand and the perceived threat of the Guru. Raja Bhim Chand Kaluria was becoming inimical towards Guru Ji, he wanted him to live in his territory as his subject and pay tribute to him, he could not tolerate his growing popularity and strength. The Battle of Bhangani was fought between Guru Gobind Singh's army and the combined forces of many Rajas of the Sivalik Hills (pahari rajas), on 18 September 1688, at Bhangani near Paonta Sahib.

Raja Bhim Chand had his eye on a beautiful ‘Kabli’ canopy that had been presented to the Guru by a devotee as well as a ‘Parsadi’ elephant and a huge war drum named Ranjit Nagara, in the possession of the Guru. As he was to wed his son to the daughter of Raja Fateh Shah, Bhim Chand took this opportunity to ask to borrow these for the wedding. Guru Ji knowing the Rajas intentions said that since these were offerings by his devotees, he was unable to hand them over to the Raja. This annoyed the Raja a lot. On the other hand, Raja Fateh Shah had become a devotee of Guru Gobind Singh Ji and he desired that Guru Ji would accompany him to the wedding celebrations. Guru Ji in his wisdom sent his representatives, Bhai Nanad Chand and Bhai Daya Ram instead. They were accompanied by 500 horsemen to guard the one and quarter lakh rupees sent for the bride on behalf of the Guru.

Bhim Chand could not tolerate the friendship of Fateh Shah and Guru Ji and threatened to break off the marriage unless he sent back the presents and stopped his friendship with Guru Ji. Fateh Shah fearing for his daughter did as he was told and agreed to wage war against Guru Gobind Singh Ji. The Gurus representatives were send home. On the way back they were joined by a horse trader who had valuable horses for the Guru. This was also an eyesore for Bhim Chand. The hill rajas conspired together to attack Guru Ji’s returning party with the intention of looting and killing them. Guru Ji’s horsemen were attacked and they defended themselves bravely. Upon reaching Paonta Sahib Bhai Nand Chand told Guru Ji what had happened. Guru Ji knew that the combined forces of the hill rajas would soon attack him and he told his Sikhs to prepare for war.

In October 1686 the hill chieftains collected a force of 30,000 men and under the leadership of Raja Bhim Chand and Fateh Shah they rode towards Paonta Sahib. Guru Gobind Singh Ji’s army consisted of around 4,000 Sikhs only besides a number of Udasis and Pathans. Except for Mahant Kirpa Das and a few others most of the Udasis had deserted the Guru. The Pathans who had taken up employment under Guru Ji on the recommendation of Pir Buddhu Shah were all bought over by Bhim Chand. They were promised free share of the loot at Paonta Sahib. Guru Ji informed Pir Buddhu Shah about the unfaithful behavior of the Pathans and he himself led his Sikhs to a place six miles outside Paonta Sahib, called Bhangani. 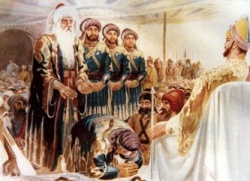 On hearing about the unreliable Pathans, Pir Buddhu Shah was greatly perturbed. Immediately he called his sons , and along with between 500 to 700 of his followers he rushed to Guru Ji’s side. Mahant Kirpal Das was using a heavy stick called a Kutka to fight, he killed Hayat Khan, the chief of the Pathans now finghting on the opposing side. Pir Buddhu Shah also fought bravely as did his sons and followers in this bloody of battles which Guru Ji describes in martial verses in his autobiography, Bachittar Natak (wondrous drama) . Besides several hundred Sikhs, the two sons of Pir Buddhu Shah and a large number of his followers died in the fighting. Guru Ji’s general Sangho Shah, after killing the brave Najabat Khan also fell in battle, so did his brother Jeet Mal thus reviving the glory of their maternal grandfather, Guru Hargobind Sahib Ji.

Raja Hari Chand one of the hill chieftains shot a volley of arrows at Guru Gobind Singh Ji, one hitting the horse and one hitting his waistband. It was then Guru Ji’s turn and his arrows spelled havoc in all directions killing numerous enemy soldiers including Raja Hari Chand. With his fall the enemy lost courage and before darkness fell they fled the battle field vanquished.

Bichitra Natak, is a narration (Bani) and autobiography of Guru Gobind Singh which contains detailed description of the battle. Guru Gobind Singh resided at Anandpur Sahib, which was located in the territory of Raja Bhim Chand of Bilaspur (Kahlur).

By the 1680s, the Guru's influence and power had increased greatly. His devotees came from distant places and brought him valuable gifts. A devotee called Duni Chand visited Anandpur in 1681, and presented him a Shamiana (a royal canopy or tent) embroidered in gold and silver, and was studded with pearls. Ratan Rai, the son of Raja Ram Rai of Assam, visited Anandpur with his mother and several ministers, and presented several gifts to the Guru, including an elephant called Prasadi (or Parsadi).

In mid-1680s, Guru Gobind Singh ordered the construction of a war drum (nagara) to enthuse his army. The job of constructing the drum was entrusted to the Guru's Diwan, Nand Chand, and the drum was named Ranjit Nagara. The use of such a war drum was limited to the chieftains, within their territory. Its use by the Guru was considered a hostile act by Raja Bhim Chand. On his Prime Minister's advice, the Raja arranged a meeting with the Guru, and visited his court in Anandpur. There, his eyes fell on the valuable gifts presented to the Guru by the devotees. 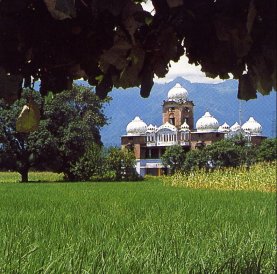 Some days later, Bhim Chand sent a message to Anandpur, asking the Guru to lend the Prasadi elephant to him. Bhim Chand wanted the elephant to make a display of his wealth to the guests at his son's proposed wedding. The Guru suspected that Bhim Chand wanted to gain permanent possession of the elephant, and declined the Raja's demand. He stated that the devotee who had presented the elephant didn't want it to be given away to anybody else. Bhim Chand is said to have sent his emissaries thrice to the Guru, the last one being Raja Kesari Chand of Jaswal. However, the Guru didn't accept his demand, and refused to part with the elephant.

The Raja was perturbed by the Guru's refusal to give away the elephant, his growing influence, and his interest in military exercises. An atmosphere of confrontation developed between the two on small issues.

In April 1685, Guru Gobind Singh moved his residence to Paonta in Sirmur state from Anandpur Sahib, at the invitation of Raja Mat Prakash (aka Medni Prakash) of Sirmur. The reasons for the shift are not clear. In the Bichitra Natak no reason is mentioned for shifting his residence to Paonta.(Bichitra Natak. Chapter 8, Chaupai 1. "Then I left my home and went to place named Paonta.") According to the Gazetteer of the Sirmur state, the Guru was compelled to quit Anandpur due to differences with Bhim Chand, and went to Toka. From Toka, he was brought to Nahan (the capital of Sirmur) by Mat Prakash. From Nahan, he proceeded to Paonta. According to Ajay S. Rawat, Mat Prakash invited the Guru to his kingdom in order to strengthen his position against Raja Fateh Shah of Garhwal. At the request of Raja Mat Prakash, the Guru constructed a fort at Paonta with help of his followers, in a short time. He continued to increase his army. Raja Fateh Shah also paid a visit to the Guru, and was received with honor in his court. The Guru established a peace treaty between the two Rajas.

The marriage of Bhim Chand's daughter was arranged with the daughter of Fateh Shah. Bhim Chand had to go from Bilaspur to Srinagar (the capital of Garhwal) for the marriage ceremony, and the shortest route passed through Paonta. However, the Guru had no faith in Bhim Chand, and he refused to let his heavily armed party pass through Paonta. After negotiations, the Guru permitted only the bridegroom and a small number of his companions to cross the ferry near Paonta. The rest of the marriage party, including Bhim Chand, had to follow a circuitous route to Srinagar. This increased Bhim Chand's hostility towards the Guru.

Fateh Shah had invited the Guru to the wedding celebrations. The Guru sent his representatives Bhai Nand Chand (or Namd Chand) and Bhai Daya Singh to the wedding celebrations. He also sent jewellery worth approximately one lakh (a hundred thousand) rupees as a gift for the bride. His representatives were accompanied by 500 horsemen to guard the gift. When Bhim Chand came to know about this gift from the Guru, he threatened to cancel the marriage if Fateh Shah accepted the gift. Fateh Shah, fearing for his daughter's future, refused to accept the gift, and sent back the Guru's contingent.

On their way back to Paonta, the Guru's horsemen were attacked by the Rajas' forces. They managed to defend themselves, and told the Guru about the incident. The Guru, anticipating an attack from the Rajas, made preparations for the war. In the Bichitra Natak, it says that Fateh Shah fought with him for no reason. 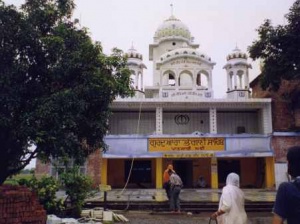 Bhim Chand and Fateh Shah formed an alliance with the other hill Rajas: Kirpal of Katoch, Gopal of Guler (or Guleria), Hari Chand of Hindur and Kesari Chand of Jaswal.

The Guru organized an army consisting of his disciples (Sikhs), and some Udasis including Mahant Kirpal Das. The Guru had enlished 500 Pathans on the recommendation of Pir Budhu Shah (a fakir, who lived at Sadhaura near Paonta). The Pathans were under the command of five chieftains: Kale Khan, Bhikan Khan, Najabat Khan (or Nijabat Khan), Hyat Khan (or Hayat Khan), and Umar Khan. Except the one hundred men under Kale Khan, all other Pathans deserted the Guru before the battle began. They were apprehensive of the scanty resources at the disposal of the Guru, and joined Bhim Chand, who promised them a share of the loot at Paonta. Most of the Udasis, except the chief Mahant Kirpal and a few others, also deserted the Guru. When the Guru informed the Pir about the defected Pathans, the Pir rushed to assist the Guru with his four sons, his brother, and around 700 of his followers.

The battle of Bhangani lasted for a day and some historians argue that it lasted for nine hours.But it was fought with great fury. As the combined armies of the hill Rajas marched towards Paonta, Guru Gobind Singh also marched towards them. The opposing forces met on the banks of Yamuna river, at Bhangani, about 10 kms (6 miles) away from Paonta. The battle resulted in the death of several of the Guru's and the Pir's disciples, including the two sons of the Pir.

Description in the Dasam Granth 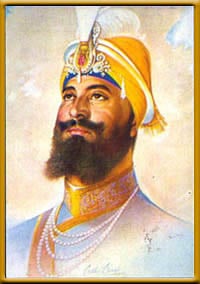 A painting of Guru Gobind Singh

This is how Guru Gobind Singh describes the Battle of Bhangani in the Bani, Bachitar Natak, which appears in chapter 8 of this section of Dasam Granth.

Guru Gobind Singh's army did not do well in the beginning but ultimately came out victorious after Guru ji became involved himself and finally won the battle.

Sometime after the Guru's return to Anandpur, peace was established between Raja Bhim Chand and Guru Gobind Singh, after the former paid a visit to the Guru with his minister.