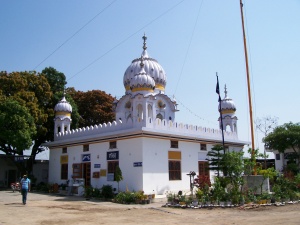 The Battle of Kiratpur was the final skirmish fought between the rulers of Ropar and Guru Hargobind ji. The battle preceding Battle of Padiala.

When guru ji was in the area of Powad on his way to kiratpur after leaving kurukshetra some hostile local rulers and pathans of ropar were planning an attack on guru sahib. But some Sikhs of the area got word of their plans and were able to thwart the planned ambush by attacking them first. When Guru ji reached the place (known as padiala) he gave blessings to the martyred sikhs.

After seeing to the fallen Sikhs cremations Guru ji moved toward Brahmin majra where he was approached by a brahmin's whose new wife had been taken in the wedding palki by some local Muslim rulers up to there all to common mischief.