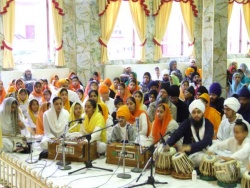 Akhand Jaap - is a movement instigated by the youth as a "World Prayer for Peace". It involves the continuous repetition of the word "Waheguru" (Wonderful Lord) which is sung continuously for up to 24 hours; It is continuous meditation without interruption. The sangat (congregation) is led by various groups of 'Kirtanias' or Ragis (musicians) in succession and the whole of the congregation join in. In singing this 'Guru Mantar', even small children can join in and feel the power of Congregational prayer and group recitation of Naam. This youth initiative which is believed to have started in the UK but has now spread throughout the world attempts to create an atmosphere in which every participating soul can benefit with direct connection to the sadh sangat and to Gurbani.

Many youngsters in the West cannot relate to kirtan because they do not understand the words or what they mean. Naam Simran is so easy to participate in, regardless of education, knowledge of Gurbani or religious perspective. It is a continuous repetition of the "Waheguru" - the name of God and his remembrance. Due to this simplicity, many young Sikhs who would not attend Gurdwaras normally have joined in and the youth involvement in Gurdwara has increase tremendously. Langar is normally served throughout the event and a many adults help with this activity.

These programmes, which have been taking place since 2001 in the UK have served as a means to unite the various Jathas (groups), Gurdwaras, and Organisations representing the Sikh community in the United Kingdom. Due to the simplicity of the repetition of a simple mantar, it has introduced non-Sikhs to the traditions of the Sikh faith. Akhand Jaaps are open to all and generally have an atmosphere of community cooperation, devotion and peace.

The Sikhkids.com has made an effort to move the Akhand Jaaps to various locations within the UK, in order to allow for the youth to participate at a national level with this Seva. Below is a list of the major past events:

British Sikh youth have been conducting events known as Akhand Jaap (continuous recitation) since September 11th 2001. These events have previously taken place on ten occasions around the UK, hosted by Gurdwaras in Essex, London, Middlesex, Yorkshire and West Midlands.

At the Akhand Jaap the word Waheguru (Wonderful Lord) is sung continuously for up to 24 hours. The congregation is led by various groups of 'Kirtanias' from around the UK and abroad. In singing this 'Gur Mantar', even small children can join in and feel the power of congregational prayer. This youth initiative attempts to create an atmosphere in which every participating soul can benefit.

On the 13th October 2007 Sikh youth from all around the United Kingdom will come together at the Sikh Religious Educational & Interfaith Event to pray for peace.

Please support this youth endeavour, let's pray for peace together!

"Commendable effort of the Sikh youth, with Satguru's grace. It needs to be positively supported." Bhai Sahib Mohinder Singh