A Miracle During World War II 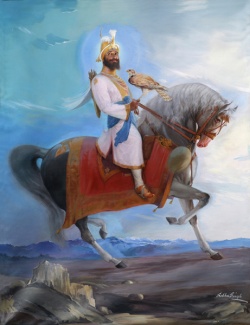 In 1964, when some of the historical weapons of Guru Gobind Singh were sent back from England to Punjab, an Englishman, in complete Sikh form, accompanied the weapons. The Sikhs in India were a little curious to see an white Englishman dressed in the Sikh bana (dress) complete with turban and flowing beard.

The Englishman was asked by one of the Sikhs the reason for his wearing the Sikh form. "Was it due to respect for the weapons or was there any other reason?" The explanation given by him at Gurdwara Bangla Sahib is given below:

"My name was A. David. I happened to be commanding a Sikh Regiment during World War II. During battle engagements, on one occasion, my Regiment suffered very heavy losses. Most of the soldiers of my Battalion were killed. Only a few survived, and we were surrounded on all sides.

As there were very remote chances for our survival, I called the Subedar Major of the Battalion and informed him about our precarious situation. Certain death was facing us and there was no chance of our survival. I suggested to him that the soldiers should individually attempt to escape from the enemy encirclement and save their lives.

"The Subedar Major replied, 'We cannot bring disgrace to the Sikh Regiment by running away from the battlefield.'

However, he had a suggestion that they should perform an [[Akhand Path] (a 48 hours continuous reading of the Siri Guru Granth Sahib) and take action as guided by the divine hukam, which is taken at the conclusion of the long reading by a relay of granthis.

Accordingly, necessary security arrangements were made and the Akhand Path was arranged and started. Fortunately, the Paath (reading of the holy text) was completed without interruption. Then followed an Ardas (a plea for blessing from Almighty God) taken by the congregation consisting of the soldiers while standing facing the holy Granth.

The miracle during ardas

After the ardas, the hukam was read and this was subsequently explained to me by Subedar Major and the granthi (religious teacher). Amazingly, the guidance given by the hukam was that we should not abandon the battlefield; victory will be ours.

"Then I conveyed to the Sikh soldiers the miracle that I had witnessed during the ardas. While standing with my eyes closed during the prayer facing the holy Granth, a fully armed Sikh on horseback, with a unique grandeur, appeared in front of me and ordered 'Follow me.'

I pointed out to the Sikhs listening the direction in which the fully armed grand Sikh went after giving the order. I asked the Sikh soldiers about the identity of the warrior. The Subedar Major said that by my description, he knew it was none other than Guru Gobind Singh.

Attack launched in the given direction

So, we made preparations and launched an attack in the direction pointed out by the Guru. Following the attack, after a short while, we were able to break through the enemy encirclement and save ourselves.

Subsequently, we got in touch with the Brigade Commander on wireless and requested additional help.

"After the war, I reflected upon the incident and the divine personality who had saved my life and my men's lives from a desperate situation by ordering me to follow him. I made up my mind to follow him for the rest of my life.

I resigned from the army, and along with my daughter, I embraced Sikhism with the initiation ceremony of the Khalsa. Now my name is Devinder Singh and my daughter's name is Surjit Kaur. This is due to the blessings of Guru Gobind Singh who took pity on us and made us his disciples."

This incident was narrated to me by my younger brother Sardar Raghbir Singh (Retired Subedar), who happened to be present at Gurdwara Bangla Sahib on the day the Englishman (Devinder Singh) narrated his above mentioned personal experience.