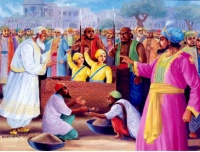 As the end of the year approaches, on December 26 every year, the global world Sikh community commemorate the martyrdom of three of their most beloved figures of the Guru household.

On this darkest of days, their youngest hero and bravest comrade of Sikhism, Sahibzada Fateh Singh (1699-1705) who was the youngest of Guru Gobind Singh's four sons, Sahibzada Zorawar Singh (1696-1705), his elder brother and Mata Gujari ji, his grandmother sacrificed their lives for their faith and the right to remain Sikhs.

Baba Fateh Singh with his elder brother, set a precedence in Sikh history (and perhaps also in world history) by becoming the youngest known martyrs to sacrifice their lives for their principles and the right to practice their religion and their faith without coercion or the threat of terror.

Even at such a tender age of just 6 years, Baba Fateh Singh showed courage, determination and free-will not to be intimidated by the cruel, barbaric and unjust authorities of the time. He showed composure, fearlessness and the renowned trait of unparalleled heroism becoming of the Sikh leadership and was prepared to sacrifice his life but not his faith. .....More