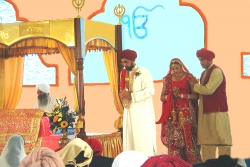 Laava or "the Four Rounds"

The laava (singular laav) are the four Shabads (sacred hymns) of the Anand Karaj (Sikh wedding ceremony). They form the central part of the marriage ceremony.

The "four rounds" ("char phaara") as they are sometimes called, form the main part of this auspicious occasion. The four Shabads that are central and form the key element of the Sikh marriage ceremony are from the Guru Granth Sahib, the Sikh holy scriptures and appear on pages 773 to 774 of the total of 1430 page of the holy Granth.

Guru Ram Das, the fourth Sikh Guru tells us on page 788 of the Sri Guru Granth Sahib about the meaning of marriage to a Sikh couple – Effectively, the Guru defines a Sikh marriage in these 2 lines:

Thus the partnership of marriage is given a special meaning - a new dimension. For a union of marriage to be successful, the two personalities have to merge into one – a spiritual bonding through understanding and love.

The Guru through the four laava gives the Sikh couple further spiritual guidance for their life together; a journey together towards liberation and union with God. The Guru tell the Sikhs of the four golden rules of married life. These rules start very clearly to define the path to be threaded together in this sacred union. The Shabads inform us how the couple as a team has to .....More