Sadh Sangat listening to Kirtan in a Gurdwara

Sat or Sadh Sangat: Company of the Holy

The Gurus taught that living in the company of the "Holy" is a way to be closer to God or Waheguru. Sangat is an idea of a group offering good community and spiritual support to its members; Sadh Sangat is the company of Holy people who are completely dedicated to Waheguru and who all aspire to the concept of Dharam - the elevation of the person to a higher and better level of understanding of righteousness and Gurmat.

The word Sangat is the Punjabi form of the Sanskrit term "sangti", which means company, fellowship or association. In Sikh vocabulary, the word has a special connotation; it stands for a body of men and women who meet religiously to practice and to act to further their spiritual path, especially in the presence of the Guru Granth Sahib. Two other expressions in common use that carry the same connotation are; "Sadh Sangat" (fellowship of the seekers of truth) and "Sat Sangat". "Sat" means "true", so "Sat Sangat" means "True company or True congregation". The word sangat has been in use since the time of Guru Nanak (1469-1539). In those days of Guru Nanak and also those of his nine successors, sangat referred to the Sikh brotherhood established in or belonging to a particular locality.

The term is used in this sense in the Janam Sakhis, i.e. traditional life-stories of Guru Nanak, and in the hukamnamas, i.e. edicts issued by the Gurus to their followers in different parts of the country. In the hukamnamas there are references, for instance, to Sarbatt Sangat Banaras Ki, i.e. the entire Sikh community of Banaras (Varanasi), Patna ki Sangat, i.e. the Sikhs of Patna, Dhaul ki Sangat, the Sikhs of Dhaul.

In common current usage, the word signifies an assembly of the devotees. Such a gathering may be in a gurdwara, in a private residence or in any other place, but in the presence of the Guru Granth Sahib. The purpose is religious prayer, instruction or ceremony. The sangat may collectively chant the sacred hymns called shabads, or, as more often happens, there may be a group of musicians who perform kirtan or a Giani (Sikh scholar) who may perform Katha (religious lecture).

At sangat there may be recitals of the holy writ with or without exposition, lectures on religious or theological topics, or narration of events from Sikh history. Social and political matters of interest for the community may as well be discussed.

In Sikh faith highest merit is assigned to meeting of the followers in sangat. This is considered essential for the spiritual edification and progress of an individual. It is a means of religious and ethical training. Worship and prayer in sangat count for more than isolated religious practice. The holy fellowship is morally elevating. Here the seeker learns to make himself useful to others by engaging in acts of seva (selfless service); work or service performed without any thought of reward or personal benefit, so highly prized in Sikhism.

Seva can take the form of looking after the assembly's shoes, as all must enter the presence of the Guru Granth Sahib barefoot; preparing and serving food in Guru ka Langar; and relieving the rigour of a hot summer day by swinging over the heads of the devotees large hand-fans. It is in the company of pious men that true religious discipline ripens. Those intent on spiritual advantage must seek it. 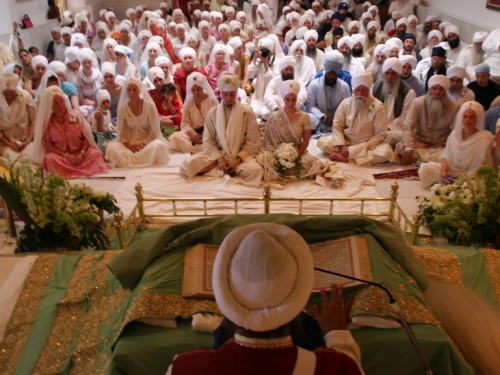 Though the sangat has freedom to discuss secular matters affecting the community, it is its spiritual core which imparts to it the status and authority it commands in the Sikh system. As Guru Nanak says, "satsangat is where the Divine Name alone is cherished" (GG, 72). This is where virtues are learnt. "Satsangat is the Guru's own school where one practises godlike qualities" (GG, 1316). Attendance at sangat wins one nearness to God and release from the circuit of birth and death. "Sitting among sangat one should recite God's praise and thereby swim across the impassable ocean of existence" (GG, 95).

As satsangat is obtained through the Guru's grace, the Name blossoms forth in the heart (GG, 67-68). "Amid sangat abides the Lord God" (GG, 94). "God resides in the sangat. He who comprehends the Guru's word realizes this truth (GG, 1314). "Deprived of sangat, one's self remains begrimed" (GG, 96). "Without sangat ego will not be dispelled" (GG, 1098). Says Guru Arjan in Sukhmani, "Highest among all works is joining the sangat and thereby conquering the evil propensities of the mind" (GG, 266). Again, "As one lost in a thick jungle rediscovers one's path, so will one be enlightened in the company of the holy" (GG, 282).

Sangat, fellowship of the holy, is thus applauded as a means of moral and spiritual uplift; it is as well a social unit which inculcates values of brotherhood, equality and seva. Sangats sprang up in the wake of Guru Nanak's extensive travels. Group of disciples formed in different places and met together in sangat to recite his hymns.

As an institution, sangat had, with its concomitants dharamsal, where the devotees gathered in the name of Akal, the Timeless Lord, to pray and sing Guru Nanak's hymns, and Guru ka Langar, community refectory, where all sat together to partake of a common repast without distinction of caste or status, symbolized the new way of life emerging from Guru Nanak's teachings. At the end of his udasis (travels), Guru Nanak settled at Kartarpur, a habitationGuru Nanak had founded on the right bank of the River Ravi.

There a community of disciples grew around him. It was not a monastic order, but a fellowship of ordinary men engaged in the ordinary occupations of life. A key element in this process of restructuring of religious and social life was the spirit of seva. Corporal works of charity and mutual help were undertaken voluntarily and zealously and considered a peculiarly pious duty. To quote Bhai Gurdas:

“dharamsal kartarpur sadhsangati sach khandu vasaia” ,
in establishing dharamsal at Kartapur,
with its sangat (society of the holy),
Guru Nanak brought the heaven on earth.

These sangats played an important role in the evolution of the Sikh community. The social implications of the institutions were far-reaching. It united the Sikhs in a particular locality or region into a brotherhood or fraternity. A member of the sangat, i.e. every Sikh was known as bhai, lit. brother, signifying one of holy living.

The sangat brought together men not only in spiritual pursuit but also in worldly affairs, forging community of purpose as well as of action based on mutual equality and brotherhood. Though sangats were spread over widely separated localities, they formed a single entity owning loyalty to the word of Guru Nanak. Sangats were thus the Sikh community in formation.

In these sangats the disciples mixed together without considerations of birth, profession or worldly position. Bhai Gurdas, his Var XI, mentions the names of the leading Sikhs of the time of Guru Nanak and his five spiritual successors. In the first 12 stanzas are described the characteristics of a gursikh, or follower of the Guru. In the succeeding stanzas occur the names of some of the prominent Sikhs, in many cases with caste, class or profession of the individual.

In some instances, even places they came from are mentioned. In these stanzas, Bhai Gurdas thus provides interesting clues to the composition, socially, of early Sikhism and its spread, geographically. Out of the 19 disciples of Guru Nanak mentioned by Bhai Gurdas, two were Muslims-Mardana, a mirasi, or bard, from his own village, and Daulat Khan Lodi, an Afghan noble. Bura, celebrated as Bhai Buddha, who was contemporary with the first six Gurus, was a Jatt of Randhava subcaste.

So was Ajitta, of Pakkhoke Randhava, in present-day Gurdaspur district. Phirna was a Khaihra Jatt; Malo and Manga were musicians; and Bhagirath, formerly a worshipper of the goddess Kali, was the chaudhari, i.e. revenue official of Malsihan, in Lahore district Of the several Khatri disciples, Mula was of Kir subcaste, Pritha and Kheda were Soinis, Prithi Mall was a Sahigal, Bhagta was Ohri, Japu a Vansi, and Sihan and Gajjan cousins were Uppals. The Sikh sangat was thus the melting-pot for the high and the low, the twice-born and the outcaste. It was a new fraternity emerging as the participants' response of discipleship to the Guru.

Sangats were knit into an organized system by Guru Amar Das who established manjis or preaching districts , each comprising a number of sangats. Guru Arjan appointed masands , community leaders, to look after sangats in different regions. Sangat was the precursor to the Khalsa manifested by Guru Gobind Singh in 1699. That was the highest point in the evolution of the casteless Sikh commonwealth originating in the institution of sangat.

I have a wonderful Muslim sister, I call her sister because when I am with her, I feel as though I am amongst members of my sadh sangat from the Gurduwara. We are both able to share our compassion for Waheguru, for Allah. I feel at much peace when I am with her and I feel the same way when I am with some of my very compassionate friends from other faiths. I feel in the company of people who love God there is the sadh sangat. In fact Gurdwara's are open to everyone of any faith and or background and the Guru Granth Sahib ji is for everyone too, why should we just limit the sadh sangat to the respectful and loving sangat in our Gurdwara. Being a Sikh it makes it easier for me to share 'virtues' with everyone and much love to the sangat on this website.

Above adapted from article By K. Jagjit Singh