Difference between revisions of "Haridwar" 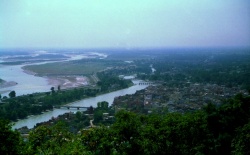 Haridwar has a rich ancient religious and cultural heritage. In the ancient scriptures of India, this place is well known by the name of Mayapur. This city is also well known for many other things apart from the holy river Ganges. IIT at Roorkee, formerly known as University of Roorkee, founded in 1847 as a first technical institute of India, is located near Haridwar. The city has one of the "navratna PSUs of India" i.e BHEL (Bharat Heavy Electricals India Ltd.). The tomb of Piran Kaliar of Shabir Shahib in Roorkee is a living example of religious harmony in India which is visited by the people of all religious sects from all over the world.

There is another University in the city called Gurukul Kangri Vishva Vidyalaya apart from the head quarter of Uttaranchal State Public Service Commission also being established at Haridwar. The major cast in the district is rajput (chauhan), saini, gujjar. Rajput major occupation is farming the land.

Besides this, Kumbh mela (fair) is held here every 12 years in this city, when one of the largest gatherings of people on the earth occurs, during which about 1 crore pilgrims from all over the world participate.

A paradise for nature-lovers, Haridwar presents kaleidoscope of Indian culture and civilisation. Haridwar also termed as 'Gateway to Gods' is known as Mayapuri, Kapila, Gangadwar as well. The followers of Lord Shiva (Har) and the followers of Lord Vishnu (Hari) pronounce this place Hardwar and Haridwar respectively as told by some. It is also a point of entry to Dev Bhoomi and Char Dham (Four main centers of pilgrimage in Uttaranchal) Viz. Badrinath, Kedarnath, Gangotri and Yamunotri.

Archaeological findings have proven that a terracotta culture dating between 1700 BCE and 1200 BCE existed in this region.

Haridwar is one of the first towns where the Ganga emerges from the mountains to touch the plains. The water in the river Ganges is thus mostly clear and cool, except in the rainy season, during which a lot of soil from the upper regions is carried along in the current. A large part of the district is forested. A part of the Rajaji National Park is within the bounds of the district. Its an ideal destination for wild life and adventure lovers.

Today Haridwar has not only religious importance but it has another temple of modern civilization i.e. BHEL, a'navratna PSU' to its credit. The Roorkee University at Roorkee (Now IIT, Roorkee.) is one of the oldest and most prestigious institutes of learning in the fields of science and engineering. Another university of the district the Gurukul Kangri, which has a vast campus, gives traditional education of its own kind.

Haridwar district, covering an area of about 2360 km². is in the western part of Uttaranchal state of India. It's latitude and longitude are 29.58 degree north and 78.13 degree east respectively. The height from the sea level is 249.7 metres. Since the district came into existence on 28th Dec. 1988, Haridwar has rapidly become a major destination for new industrial development in the new state. Many Government administration offices such as the Lok Sewa Ayog and Sanskrit Academy are located here.

Prior to its inclusion in the newly created state of Uttaranchal, this district was a part of Saharanpur Divisional Commissionary. The district is ringed by Saharanpur in the west, Dehradun in the north and east, Pauri Garhwal in the east, Muzaffarnagar and Bijnor in the south. The district headquarters is situated in the Roshnabad, at a distance of about 12 km from railway station. The Collectorate, Vikas Bhawan, District Judiciary, S.S.P. Office, Police line, District Jail, District sports stadium, Jawahar Navodaya Vidyalaya are some of the prime establishments of this area. The district is administratively subdivided into three tehsils; Haridwar, Roorkee and Laksar and the six special development blocks of Bhagwanpur, Roorkee, Narsan, Bahadrabad, Laksar and Khanpur. As per the 2001 census, the population of the district is 14,44,213. Due to Haridwar's location on the bank of river Ganga and its abundance of water resources, almost every type of food grain is produced here in abundance.