From SikhiWiki
Revision as of 11:21, 17 April 2010 by Hari singh (talk | contribs) (Created page with '{{p|File:Janam-sakhi miniature.jpg|}} '''Anglo-Sikh Heritage Trail''' or ASHT is an Anglo-Sikh organisation whose aim is to promote a greater awareness of the shared heritage be…')
(diff) ← Older revision | Latest revision (diff) | Newer revision → (diff)
Jump to navigationJump to search 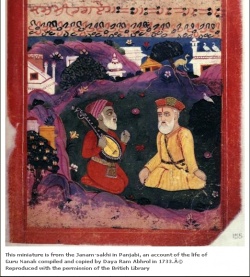 Anglo-Sikh Heritage Trail or ASHT is an Anglo-Sikh organisation whose aim is to promote a greater awareness of the shared heritage between the Sikhs and the British; the organisation through its website explores this close relationship between the two peoples and cultures through historical personalities, shared treasures/artefacts and the joint cultural background as they exist in Britain today and in the past.

Together with the Royal Geographical Society (RGS), which holds a vast collection of maps, photographs, documents and books which impact on these communities it hopes to share these historical documents with both communities. The RGS's database includes historical maps of the Punjab, paintings and archive photographs relating to the history of the Punjab and the Sikh people.

Following the awarded a 3 year grant from the Heritage Lottery Fund of a total of £660,000, ASHT has embarked on an ambitious three year programme (Phase two: 2007-2010) of initiatives covering education, research, and outreach. This will include:

Enhancing your journey through history - There couldn't be a better time to join ASHT, the pioneering initiative preserving and profiling Sikh heritage in Britain. Your membership will directly support the charity in promoting this unique heritage now and inspire future generations. You can enjoy a range of exclusive benefits which promise to enrich your journey through history

This touching tale of the life of Maharajah Duleep Singh, told from the perspective of one of the world's most famous diamonds, the Kohinoor, captivated school pupils. After its launch at the Birmingham Drum in early March, â€˜The Maharajah and the Kohinoor' is now touring schools, gurudwaras and community venues around the country until the end of the year.

The highly successful ASHT Battlefield Tour returns this year with a day trip on Saturday 29th May taking visitors on a journey that highlights the tremendous contribution made by Sikh soldiers during WW1.

A touching ceremony remembers Commonwealth War dead at London's Hyde Park Memorial Gates - The intimate ceremony opened with a speech by the Bishop of London who quoted a hymn by Guru Nanak Dev Ji, followed by a wreath laying ceremony presented by representatives from the former colonies.

As part of Northern Sikhi Week, a joint collaborative series of events organised by University Sikh Societies based in the North, the Anglo Sikh Heritage Trail gave an illustrated talk to the Leeds Metropolitan University Sikh Society on Sikhs in War. Over 50 students attended the lecture highlighting the Tradition of Valour that Sikhs as soldiers have established over the last three centuries.