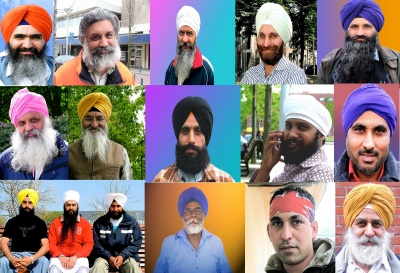 Who is a Sikh?
photos courtesy of Roel1943 on Flickr

The word Sikh literally means "a learner" and is derived from the Sanskrit word "shishya" which means disciple or student or learner; the term is also related to "Saknoti" which means "able and strong".

In the Punjabi language the word Sikh literally means to learn. A Sikh is a follower of the religion called Sikhi or Sikhism, which is the fifth largest organised religion in the world. A Sikh is a disciple of the Guru Granth Sahib which is more than a Holy book for the Sikhs - It is their perpetual and living spiritual teacher and guide.

Fortunately for us, this question has been answered by the Sikh Gurus who created this word; so it is not difficult to arrive at an answer. However, it appears that many politicians and the legal system in India have taken it upon themselves to redefine this word. This is not a wise move. It is always dangerous when some small section of the global community decides to redefine a term that has overtaken them and has now become an international term.

The word now does not just apply to people who reside in India; many millions of Sikhs live outside India and many will have never seen India and many will never ever go to India! Further, there are many non-Sikhs who love and follow the teaching of Guru Nanak and are drawn to the faith; how can a few politicians in a small state of India called Punjab decide on the terminology used worldwide?

The founder Sikh Guru, Guru Nanak first used the word 'Sikh' in about 1500; since then during the time of the first 9 Guru's, many millions of Sikhs roamed Punjab and the rest of the Indian sub-continent. Many Sikhs were found in surrounding countries like Afghanistan, Nepal, etc. All these Sikhs understood who they were and what there faith was; they knew the message of the Sikh Gurus and they followed it as best as possible.

The Sikh Gurus over a period of 239 years established the faith known as Sikhi and in so doing gave meaning to the word "Sikh". It appears that the politicians are not satisfied with what the Gurus have said and wish to make their own definitions. This cannot be acceptable to the follower of the Sikh Gurus. Sikhi is an inclusive religion and the term Sikh has a wide coverage; it is not an exclusive term. The meaning of the word has been a reality and a certainty for many hundreds of years; the meaning of the word has been established by the Gurus and must remain so forever. It should be our task to understand what meaning the Gurus gave to this word rather than to tinker it to suit our present political needs.

The word "Sikh" appears in the Guru Granth Sahib English translation 156 times as Sikh, Sikhs, Gursikh(s), Sikh(s) of the Guru, etc. In some of these places, the Guru explains and defines this word. The definition of this word is a combination of all these explanations found in the holy Granth in these 156 locations.

Only the careful study of these verses, where this word appears would yield a good idea of the meaning of the term. However, one could also, combine with this the explanations found in the Dasam Granth and also the text by historic scholars like Bhai Gurdas, {{Bhai Nand Lal]], etc.

The word "Sikh" and "Khalsa" are treated differently in the holy Granth and must be treated separately in real life. Although there is some overlap in the definitions of these words, they are two different and distinct terms. There is considerable confusion in some Sikh sections about this distinction and some elements in the restricted establishment have lost the vision to cater for the global Sikh community. This is a un-welcomed situation which could be extremely detrimental to the Sikh panth and to the spread of the universal message of Guru Nanak and the Sikh Gurus.

Rather than get unnecessarily involved in any ugly proceedings of the current drama taking place the the Courts and the political arena in India, let us turn to what has been said in the Guru Granth Sahib regarding this word - Sikh or Gursikh?

Summary of the message of Gurbani

The list below summarises the Shabads found in the next section dealing with Gurbani. Only Shabads that offer an explanation of the term and are different from previous Shabads mentioned are listed. In taking all the Gurbani's definition of a Sikh into cosideration, one can summarise these as follows:

1. This Shabad by the fourth Sikh Guru, Guru Ram Das gives in one compact paragraph the precise definition of a Gursikh. What is interesting is that most of the condition pertain to the frame of mind and the habits that endear the Sikh to the Guru rather than to the physical form. It is accepted that this may have been developed by later Gurus, but what is important to understand where the importance was laid by the Gurus in the initial stage of Sikhism. Further, the later Gurus did not modify this shabad or add anything very different to the holy Granth to reflect any major change in this definition.

The important of meditating on the Lord's Name is central and main theme of the whole hymn. Then comes the need to do this yourself and to encourage others to do it; finally the prefered ways to carry out this practise. In the early hours; after bathing but standing or sitting is not important to meditate on His name. Keep the Lord in your mind at all times!