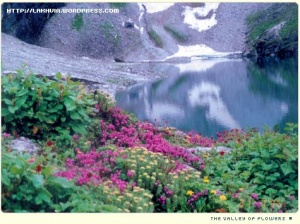 This is also a part of hemkunt sahib journey as mostly travellers go here also to see natural beauty. Hidden from the probing eyes of civilization, this valley had been known to the inhabitants as the Bhyundar Valley, the playground of Fairies and Nymphs. According to Hindu legend, this is the place where the Monkey God, Hanuman found the medicinal herb “Sanjeevanji” which saved the god Lakshman, younger brother to Lord Ram, after being gravely wounded in battle against the son of Ravan. Hindus believe that the Gods showered flowers from Heaven in celebration of Hanuman’s miraculous effort, and henceforth, these flowers took root in the Valley. There are many more tales told about the sanctity of the Valley of Flowers within Hindu mythology and epics; Mahabarata and Ramayana. Similarly, the Valley of Flowers has meaning beyond beauty and bounty for Sikhs – who believe the exotic flora, took root when all 108 Gods and Goddesses showered flowers on their Tenth Guru, Gobind Singh, when he achieved oneness with God in his previous incarnation. Thus the “Valley has been host to great sages who attained enlightenment while meditating there.”

“The valley of flowers is an alpine valley, and has been formed by retreating glaciers whose periodic advances and retreat pulverized hard rocks, resulting in a smooth u- shaped valley. Hidden from the probing eyes of civilization, this valley had been known to the inhabitants as the Bhyundar Valley, the playground of Fairies and Nymphs.” The Valley is a God sent paradise for naturalists, ecologists, environmentalists, zoologists, ornithologists, trekkers, tourists and pilgrim’s alike, offering incalculable species of flora and fauna exclusive to the vicinity. This modern day Garden of Eden was introduced to the outside world in 1938 by the famous mountaineer, explorer, botanist Frank S. Smythe and later author of the book “The Valley of Flowers” through which he “threw open the doors of this verdant jewel to nature.”

Flora and Fauna Amidst the many species of flora, roam species of animals unique to this meadow namely; Himalayan Birds, Phigents, Butterflies, Tendulas, Musk Deer, Bharal – Blue Sheep, Himalayan Black Bears, Thar, Snow Leopards and Tale-less Rats. The valley hosts over 300 species of flora, including a variety of herbal plants such as Bergenias, Wood Lilies, Trillium Govanianums and Marsh Orchids to name but a few. Exclusive to the Valley are breathtakingly beautiful plants such as the Arisaema Costatum also known as Arum which resembles the head of a cobra, the Unique Blue Poppy and the Saussurea obvallata known as the Brahma Kamal the Lotus referred to as the King of the Valley.

The Riot of Colours Come April Mother Nature awakes, and the snow begins to melt as she breathes life into the “dead herbage of the previous summers”, each season reflecting the colors of her life. The early rains in June add the shades of rosy pinks and reds as the Balsam, Geraniums, Pedicularis, Cyprip Edium Himalaicums – Lady’s slippers, Androsaces and Marsh Orchids come in to bloom, contrasting with the yellow, purple and white; Primulas, Anemenoes, Anaphalles and Potentillas. From late July to August, the colour yellow dominates as Pedicularis Grandiflora, Ligularias and Saxifragas dominate. The variety of colours is vibrant to match their hues that fill the landscape. From September, the “sun kissed” valley takes rest and, as October approaches, Mother Nature falls into deeper slumber awaiting her blanket of crisp white snow. And so the cycle of life continues!