The Creator permeates all creation 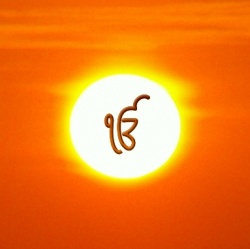 In the invocation to Japji Sahib, Satguru Nanak provides us with a working definition of the Creator, in mystical but precise terminology - "Ik-Oamkâr Satinam(u) Karta Purakh Nirbhau Nirvair Akâl-murat(i) Ajuni Saibhan Gur-prasâd(i)". There is only one Creator, His existence is a reality, He is the only Creator, without fear or rancour, he is beyond death or birth, by himself is he luminous.

By studying Guru Granth Sahib, a Sikh learns that the Creator is Infinite, but HIS presence in His creation can be experienced with a disciplined state of mind. Satguru guides the Sikhs to experience HIM within. For this, one needs to be ready to overcome all negative (primal) forces known as ego, anger, lust, deep attachment and greed, which trigger continuous ups and downs in the human mind. In Gurbani, nothing is as important as the love developed for the Creator, all the rest seen and enjoyed are of no use for uniting the soul with the almighty. Stress is given not only on battling the five negative forces but also changing the attitudes towards His creation. The attitude based on the five negative forces must be changed to be ready for God. A Sikh takes helps from the Guru to achieve the goal:

Guru leads the Sikhs on a way that helps to have victory over the five forces. When a Sikh realizes that the Creator who is beyond death and birth can be experienced within, if Guru’s said advice is made base for living; he/she is elevated even before the experience occurs because, as per Guru’s advice, he/she gets ready to abandon everything that can cause obstacles in the way of soul experience. It is needed to have a strong urge to experience The Almighty; if the urge is weak, there are chances that the soul can be dragged down to illusions, which distract us from the Guru’s said goal. Satguru makes it explicit in the hymn:

To have our mind concentrate on Prabh ji, - Providence - the elimination of negative forces is esential. A mind set for others' spouses and money leads to destruction. The habit of criticizing behind one’s back, and harboring anger become one’s own enemy. They must be won over because within the body resides the Creator. Basically, these negative forces are hindrances in achieving the ordained goal because it becomes impossible to be in love with HIM while indulging in vices and giving in to these negative forces:

The mind must have single minded concentration on HIM. When a choice is made and the decision to follow Guru’s teaching is taken, a Sikh, armed with Guru- inspiration, feels that God’s experience is inevitable. How close one can go in achieving the goal depends on the battle with the hindering forces. Satgur declares:

With that state of mind, nothing is more important than Prabh, no one appeals to the heart but HIM (Prabh). HE, the Creator, only brings peace to heart. There should be no place in the heart for any other power but HIM. Being absorbed in HIS love, thinking about HIM, and dreaming of HIM brings everlasting joy. This is the kind of state of mind Satguru wants a Sikh to develop. For anyone who longs to see HIM, Sahib further clarifies:

It is very important to remember that love for HIM and keeping undisturbed concentration on HIM should become a permanent part of life. A Sikh should not harbor an illusion that The Creator can be on his/her side by doing charity works, by sitting in meditation, singing religious songs, practicing Yog, doing pilgrimage, becoming a naked sadhu in search of HIM, fighting with bravery, or becoming very polite and humble. Satguru says that HE is pleased only if HIS Naam simran is done with high gravity of sincerity, vide the verse beginning:

So there is no place for showing off, because HE is pleased only with Naam-simran, which is also stated as a complete involvement with the Creator. Naam Simran can only be done if the mind is set up for HIM only. If the mind is still divided by other diversions, longings and urges, Sahib in a simple way asserts that experiencing The Almighty becomes difficult; Read the following shabad:

Here, Satguru echoes questions about The Creator, and then answers them. Who can show the place where HE resides? What are the obstacles in the way and how these obstacles can be removed permanently? Who can find that hidden place where HE resides; someone who knows should tell me because I am also searching HIM, while enduring pains of separation from HIM? There is an assertion that after death we will meet HIM, but how can we meet HIM while being alive?

Guru states that sorrow and pain serve as a door—which has been closed by hope, fantasy and fear and is being guarded by anger. Before the door, a deep trench of Maya triggering vices of different kinds exists. Behind the door, The Almighty resides. HE has thousands of names to call by, yet it’s very hard to know HIM and there is no one equal to HIM. It is not advisable to argue about The Infinite, it is better to stay tuned to HIM, as HE knows what He does. What should we do then? Empower ourselves with love for HIM and stay above hopes and desires? Of course, because when they are there, only sorrow, pain and fear exist. Their existence makes it difficult to love wholeheartedly.

Let’s say that, while living in a world filled with hopes and fantasies, one decides to stay indifferent to these hopes and fantasies; instead one concentrates single-mindedly on HIM. The result is that all hopes and pains become ineffective. In this state of mind, one watches the world’s script as a play without being involved in its distractions. Any thing that comes this way—happiness or sorrow—is considered HIS gift, as none can hit the balanced mind tuned to HIM. This is also known as the elimination of distracting forces. This will lead us to experience HIM while living. After having said that I must make it clear that Satguru doesn’t ask the Sikh to stop working or carry out his responsibilities.

In clear words Guru advises to work hard and share the earning with the needy. If a Sikh is on a job, it should be done diligently; if a Sikh is in a business, responsibility of the business should be taken seriously; however, never allow ego, greed, anger, lust or attachment to take control over the soul. Rituals and ceremony of any kind will not help us in getting closer to HIM. A Sikh must come out of the dark illusions and be faithful to HIM with a heart filled completely with love for HIM. Any neutral in-between situation shall bear no fruit.