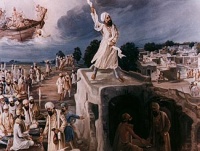 Baba Makhan Shah was a devout Sikh and was responsible for finding the ninth Sikh Guru, Guru Tegh Bahadur and Lakhi Shah Vanjara was responsible for cremating the body of ninth Guru in his own house. Lobanas also fought many wars with Guru Gobind Singh and Baba Banda Singh Bahadur.

Lobanas are a tribe who live all over India. Labanas have their own language called "Lubanki" which is a dialect. However, this language is only spoken by Labanas outside the Punjab, state of [[India[[. The Labanas of Punjab and Haryana are mostly Sikhs and speak mainly Punjabi or Hindi.

The term Lobana appears to have been derived from LUN ("salt") and the BANA ("trade"). The Lobanas were the great salt-carrying and salt-trading community. They were occasionally called "Banjaras". In Punjab, they were known by several different names. In Ambala district, for example, on account of their versatility in adopting different vocations, the Lobanas were called "Bahrupias" .....More