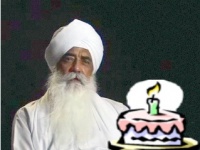 Bhai Sahib Bhai Mohinder Singh was born on 31 March 1939 and is the mukhi-Sewadar (the main volunteer) of the Sikh organisation called Guru Nanak Nishkam Sewak Jatha, which has its head office in Birmingham, UK.

He has been linked to this organisation since 1974 when he met the founder and spiritual inspiration of the organisation, Sant Baba Puran Singh ji, Kericho-wala in Kenya.

Bhai sahib spent most of his childhood in East Africa; with most of his secondary education in Nairobi, Kenya. At an early age, Bhai sahib's mother passed away. Bhai sahib has such fond memory of his mother and the difficult time surrounding the sudden death of his mother.

Bhai sahib's father re-married and a stable family environment was re-established; he excelled in his studies going to the top schools in Nairobi; further university education was undertaken in the UK.

It was in 1995 that Bhai Sahib was called to take on the responsibilities of this Jatha (organisation) when Bhai Norang Singh passed away. His first main task was to successfully complete the UK sangat's project of re-gilding the Sri Harimandir Sahib. Since those times, with Bhai sahib's energy and dedication and Waheguru's kirpa, the global Sikh Sangat and Jatha together have completed many important projects for the Sikh Panth (Sikh Global Society). .....More