From SikhiWiki
Jump to navigationJump to search
Char Sahibzade: The Four Sons 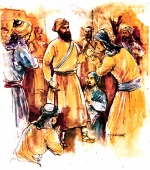 The younger pair, called the "Chotta Sahibzade" (younger sons) were martyred together by the Mughals in Sirhind at the tender age of 6 and 9 years old. The older sahibzade, called the "Vaada Sahibzade" (older sons) died fighting the enemy of many thousands at the young age of 18 and 14 years old in battle at Chamkaur Sahib.

Char Sahibzade, ("char" means four and "sahibzade" refers to the sons or scions, young men of genteel birth) is a term endearingly used for the four sons of Guru Gobind Singh, (Nanak X) all of whom died as martyrs while still very young. Their names are reverently preserved in Sikh memory and are recalled every time Sikh ardas or prayer of supplication is recited at a congregation (sangat) or privately by an individual.

The martyrdom of the four sahibzade is an important part of Sikh history and the occasion of the martyrdom is remembered and commemorated with great vigour, by large numbers of Sikhs and very acute sadness every year on 21st and 26th of December by the Sikh Sangat (holy congregation). .....More