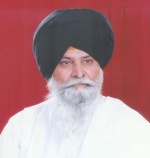 It is beyond doubt that "Panth Rattan" Giani Sant Singh Maskeen (1934 - 2005) was the most venerated, the best known and the most honoured religious lecturer among the Sikhs. This was due to the fact that he had an in-depth knowledge of Gurmat and Gurbani, a wide knowledge of other religions and an excellent inter-woven art of delivery.

He always fixed his annual programmes in advance and would stick to his schedules come what may. He had made a profound study of Sri Guru Granth Sahib and had acquired a deep knowledge of the Vedas and Bhagat Vanis as enshrined in the Sri Guru Granth Sahib; some of which was learnt from the famous Nirmalas Sant Balwant Singh ji.

Apart from Gurmukhi, Urdu and Hindi he had a command over Farsi (Persian) and often quoted Bhai Nand Lal Ji in fluent Farsi. During discourses he also used to quote from the religious texts of Hindu, Muslim and other world religions with all the useful relevant references. He was a delight to listen to. Due to this unique talent, his video lectures are still very popular on Sikh TV channels. .....More