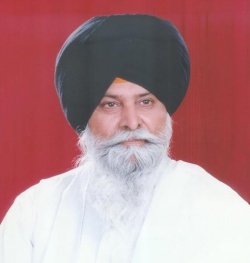 In a unique coincidence, Giani Sant Singh Maskeen (1934-18 February 2005) wrote me a letter dated 12th February 2005 in his own handwriting, inviting me to attend the Annual Gurmat Samagam at Alwar on 3rd March 2005.

In his letter, he informed me that due to the pre-scheduled programme of Gurbani discourses at Amritsar he could not be present in a meeting called by me in Delhi. By the time the letter was delivered to me, he had already left for his Heavenly abode – as if he himself had fixed his date of last prayer.

At the time of partition of the Indian sub-continent in 1947, Maskeen Ji, like millions of Sikhs, was uprooted from the Western Punjab, now in Pakistan, and finally settled in Alwar, where he spent 57 years of his life. Every year, since the last four decades, a Gurmat Samagam had been held on 1st, 2nd and 3rd March under his personal supervision.

Eminent Gurmat scholars/preachers, Keertan Jathas and thousands of devotees came to participate in the annual gurmat samagam from various part of the country. As per the tradition of Sikhism, Guru’s Langar, (free community kitchen), was served uninterrupted for three days to all who had come.

My visit to Alwar, Rajasthan

Last year I, along with my wife, Utamjit Kaur visited Alwar, particularly to join the Gurmat Samagam; it was an exceptional experience. A moderate Sikh population is settled in the villages around Alwar city.

At the time, two Sikhs Schools were functional and a big educational centre had already been erected under the able guidance of Maskeen Ji. I am now concerned about the completion of the community welfare projects which Maskeen ji had started. Will any reputed Panthic organization come forward to take charge of these institutions and to make the dreams of Maskeen Ji into reality?

During initial years of Gurmat Parchar, Maskeen ji had to struggle hard to sustain with his mission because of his weak financial position, however, he was not a man to give up so easily. He used to walk miles to attend the religious congregation and to make discourses on gurmat in villages.

Whatever little the sangat used to offer out of love and affection was his only source of income and he boldly faced all the challenges that came his way and remained firm in his goal of spreading the message of the holy Guru Granth Sahib for the benefits of all mankind.

He always preferred to stay miles away from politics and factionalism. Wherever he went in India and abroad for Gurmat Parchar, he never deterred to ask the Sikhs to adopt the proper system of management, as per the tenets of Gurmat; to maintain the gurdwaras and uphold other panthic institutions.

At our last meeting, he presented me with a book, which he had authored on the subject of Gurdwara management. He was very much concerned about the election procedure used to constitute the committees for the management of Gurdwaras. This process had now become the root cause for the infighting among Sikhs all over the world.

It is beyond doubt that Giani Sant Singh Maskeen was the most venerated and best known religious scholar among the Sikhs due to the fact that he had the in-depth knowledge of Gurmat, comparative religion and the excellent art of delivery.

He always fixed his annual programmes in advance and would stick to his schedules come what may. He had made a profound study of Sri Guru Granth Sahib and had acquired an in-depth knowledge of Vedas and Bhagat Vanis as enshrined in Sri Guru Granth Sahib from the Nirmalas Sant Balwant Singh Ji.

Apart from Gurmukhi and Hindi he had a command over Farsi and often quoted Bhai Nand Lal Ji. During discourses he also used to quote from the religious texts of Hindu, Muslim and other world religions with all the useful relevant references.

In his discourses Maskeen ji particularly used to mention about Bhagat Vanis as enshrined in Guru Granth Sahib, which is full of reference to Rama, Krishna and other Hindu Gods and Goddesses, and often said that, to understand the message of Gurbani it is necessary to have basic knowledge of Indian culture and traditions.

Sometimes, given a wrong label

Though some Sikhs scholars who failed to understand his thoughtful analytical expression labeled him as pro-brahminical. If these ‘scholars’ continue to spread wrong notions, they could raise questions about the authenticity of Bhagat Vani, or about references to Islam in Guru Granth Sahib.

If the critics had their way, tomorrow they may raise voices to remove the name of Ram and Allah from Guru Granth Sahib. Surprisingly, how little they realise that it is due to this uniqueness of Guru Granth Sahib that it has been revered as the holy text of the mankind all across the globe.

Maskeen Ji’s sudden departure a year ago stunned one and all; thousands of Sikhs from across the world came to take part in his funeral procession. On the day of his funeral, Ragis in Darbar Sahib sung Shabad Keertan on sad tunes. This shows how much love and respect the Sikhs had for Maskeen ji.

A year ago the Sikh masses praised SGPC for making excellent arrangements for the last rites. Though Maskeen Ji had already been the recipient of the highest honour “Panth Ratan” during his lifetime, on the day of his Bhog ceremony he was honoured by SGPC with “Gurmat Vidya Marthand” posthumous award.

Bibi Jagir Kaur, President SGPC also announced "Bhai Gurdas Gold posthumous Award", worth rupees one lakh, for Maskeen Ji and also presented a cheque for rupees ten lakh to the wife of Maskeen Ji for his outstanding contribution in the cause of Sikhism and Gurmat way of life. Unfortunately, she too now has cast away her mortal coil and joined the Holy spirit.

In my tribute last year, I made a proposal that a responsible premier Institution of the Panth should collect and preserve all the priceless recordings of Giani Sant Singh Maskeen Ji’s discourses for the use and benefit of the future generation.

Those who are interested in making thorough research study of his contribution should be allowed to copy from the original version in order to create more preachers on the line of Maskeen Ji. Only this way the message of Gurmat can be spread among the people of various faiths.

I also stress on the need that the learning of the Vedas, Holy Koran and the Farsi Language should be made compulsory for all the preachers in order to deliver the correct interpretation of gurbani as Sri Guru Granth Sahib Ji is replete with all such references.

Tribute from Prime Minister of India

I also recall Dr. Manmohan Singh, Prime Minister of India’s tribute to Maskeen Ji in which he expressed his gratitude to Maskeen Ji’s in-depth knowledge of Gurmat and his outstanding contribution in spreading the message of humanity through Gurbani. I also made an appeal to the leaders of the panth that the interest of 13 million strong population of the Sikhs of Rajasthan should always be taken into account while discussing Panthic Matters because Maskeen Ji had been a great moral support for them.

With the passing away of Maskeen Ji, the Sikh Panth has lost two of its Precious Jewels in a couple of months, first it was Yogi Harbhjan Singh Ji who sowed the seeds of Sikhism in America and later the death of great preacher Giani Sant Singh Maskeen Ji. Indeed it is difficult to fill-up the void created by the death of these two great personalities of the Sikh Panth.

Without mentioning about his fearlessness this article will remain incomplete. I remember that in 1984 when the Indian Army attacked and sieged Sri Darbar Sahib and many other gurdwaras, he endured great mental agony due to this act of sacrilege.

When the curfew was lifted he made an emotional electrifying speech (on the first diwans held at Gurdwara Shahidan) to rejuvenate the mentally demoralized Sikhs due to the army attack on their holiest shrine.

Professor Darshan Singh Ji, another outstanding personality of Sikh Panth, recited Gurbani keertan to provide the healing touch to the broken hearts of the Sikhs. It was these two personalities who helped the Sikh Panth, through the healing message of Gurbani, to successfully counter and to emerge triumphant from the most difficult period in their recent history.

Obituary - Maskeen was an epitome of learning

GIANI Sant Singh Maskeen, who died following a massive heart attack at Etawah in Uttar Pradesh yesterday, was not only an exemplary preacher, interpreter of religious scriptures but also an epitome of learning. His limited formal education notwithstanding, Gianiji had studied various granths in depth.

Born in Lak Makwat tehsil of Ban district in North West Frontier province in 1931, Giani Sant Singh Maskeen had to skip his matriculation examination because of partition. His parents moved to Alwar in Rajasthan where he joined the sacred company of various religious heads, preachers and saints. His interest in religious studies did not wane even after he got married to Bibi Sundar Kaur in 1958.

Though his family got into motor parts business, Giani Sant Singh Maskeen dedicated his life to religion. He leaves behind besides his widow, three sons and two daughters.

Interestingly, Giani Sant Singh Maskeen had immaculate familiarisation with the works of some of greatest Urdu poets, including Ghalib and Iqbal. His knowledge of Bhagwad Geeta, Quran and holy scriptures of other religions made it easier for him to interpret Guru Granth Sahib and recitations of various other saints, including Sufi saints. Bhai Gurdass, Guru Ravi Dass, Bhagat Kabir and Sheikh Farid often used to get mention in his discourses. He also used to refer to work done by various religious scholars. For example, he had gone through all 23 interpretations of Japuji Sahib, including by Bhai Nand Lal, Acharya Rajnish, Giani Gurdit Singh and Bhai Veer Singh.

He was a globe-trotter and delivered discourses on various aspects of Gurbani at gurdwaras and religious congregations on important occasions. Known for his candid comments, Giani Sant Singh Maskeen was bestowed with the tile of "Panth Rattan" by the Shiromani Gurdwara Parbandhak Committee. In fact it went to his credit that coming from a Hindi belt, he turned out to be an undisputed number one interpreter-cum-preacher of Gurbani.

Though just a matriculate, he authored a number of books on various religious scriptures. His Gurbani interpretation programmes were regularly serialised on various channels. One of the channels used to telecast his discourses every morning.

As a mark of respect to him, both the Shiromani Gurdwara Parbandhak Committee and the Delhi Sikh Gurdwara Management Committee closed their offices for two days. He will be cremated at Alwar on Sunday.