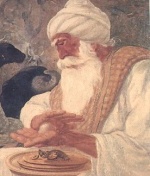 After sometime the family settled down in Dhalla village not far away from river Ravi opposite Kartarpur. "Bura", as he was originally named, was the only son of Bhai Suggha, a Jatt of Randhava clan, and Mai Gauran, born into a Sandhu family.

Bhai Budha occupies a unique position in Sikh history. He applied the tilak (forehead mark) of guruship to five Gurus, physically saw and had the vision of seven Sikh Gurus and remained in close association with the first six Sikh Gurus from 1521 to 1631 for over one hundred years. He was the first 'priest' (Giani) of Harimandir Sahib, and laid the foundations of Dera Baba Nanak and most of the holy buildings at Amritsar.

As a small boy, he was one day grazing cattle outside the village when, in 1521 A.D, Guru Nanak happened to pass by his village. .....More