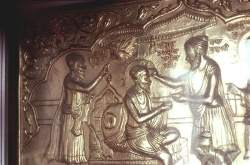 In Indian culture, a tilak or tilaka is a mark (normally saffron or red in colour) worn on the forehead. It is a mark that is applied at the "Ajna Chakra", the space between the two eyebrows. Today, the Tilaka can be worn on a daily basis or for special religious occasions depending on different local customs. It is normally made from sandal paste or kumkum (red tumeric).

In early Sikhism, the tilak was placed on the forehead of the Guru as a sign of his ascendancy to guruship, the spiritual leadership of the Sikhs. Bhai Buddha was a devoted disciple of Guru Nanak, the founder Sikh Guru. Such was the eminence he had attained in Sikh piety that, at the time of the installation of Bhai Lahina as second Sikh Guru, (named Guru Angad upon installation, (Nanak II)), Guru Nanak asked Bhai Buddha to apply the ceremonial tilak on Bhai Lahina's forehead.

In the past, tilaks were usually worn by priests, ascetics, or worshippers, and other holy people. It symbolize the third eye, or mind's eye, that is associated with the idea of a different perception of the world which is focussed on the spiritual angle of life as opposed to the purely materialist vision which is perceived by the physical eyes.

No doubt, this practice of applying Tilak on forehead was in use upto 6th guru but with creation of Khalsa in 1699 by 10th guru, it was abondoned as Guru said to his Sikhs; “ You are the immortal soldiers of true dharma and the messengers of God. This country’s honor and liberty is entrusted to you by Waheguru. Mix freely with the world, but remain of one soul, one ideal and one aim.”Women shall be equal of men in every walk of life and their names would bear the epithet ‘KAUR’ meaning princess. He who kills his daughter, the Khalsa will snap ties with him. By doing so guru ji also once again added respectability to the women folk. You will keep unshorn hair to look like ancient sages. You will love the weapons of war and become excellent horsemen, marksmen, sportsmen and wielders of swords and spears. Physical prowess will be as sacred to you as spiritual sensitiveness. You are friend of all but enemy to none except the oppression. You would serve the poor without distinction of Caste, Creed, religion or region and would protect them with Deg (community food) and The ( physical strength). You will call yourself as Singh i.e. lions and greet each other with the salutation Waheguru ji ka khalsa waheguru ji ki fateh meansKhalsa belongs to god Victory be to God.

Five freedoms ; According to the Guru a person who is baptized completely cut off from his social past in which he had been living before being baptized.. Such a person enjoys five freedoms; 1)- The total freedom from the tenets of his previous religion i.e. Dharam nash, 2)- He becomes free from his earlier deeds i.e. Karam Nash, 3)- He snaps his ties of his caste, race, clan, or heritage i.e. Kul nash,———now onwards, his father is Guru Gobind Singh, mother of khalsa is Sahib kaur and his place of birth is Anandpur Sahib. 4)- He is absolutely free from taboos, customs and rituals in which he was engrossed before baptism i.e. Bharam Nash, 5)- Finally he is free from all vocational distinctions i.e. Sharam Nash—-He developes this notion that his liberation is possible during his life by serving humanity and meditating on naam i.e. God’s name. he becomes saint and soldier simultaneously when he joins Khalsa brotherhood.