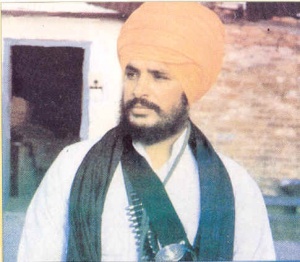 Sukhdev Singh Babbar was the supreme leader and a founding member of Babbar Khalsa International, the best armed, most feared and most powerful of dozens of the militant groups in Punjab State that are fighting for an independent state for Sikhs, known as Khalistan[1]. He co-founded the Babbar Khalsa International (BKI) with Talwinder Singh Parmar and served as its commander for 11 years until his death when he was betrayed by a former associate turned government 'Cat'.

Sukhdev Singh "Babbar" was born on August 9, 1955 in the house of in the house of Mr. Jind Singh and Mrs. Harnam Kaur in the village of Dassuwal, Patti, Amritsar, Punjab, India. He could study up to the middle level only. He had three brothers. His elder brother, Mr Mehal Singh "Babbar" is also an active leader of the Babbar Khalsa International[2]. His younger brother Angrej Singh is blind. His family owned 18-acres of land in the village of Dassuwal. The wives of Sukhdev Singh Babbar and Mehal Singh Babbar are sisters who belonged to the adjoining village of Ghariala[3]

Participation in the Khalistan movement

According to a story printed in The Tribune, the day of the Nirankari-Sikh clash (April 13, 1978) was also the day when Sukhdev Singh Babbar marriage was fixed. On this day, he took the pledge to take revenge on the Nirankaris[4].

He founded the Babbar Khalsa International along with Talwinder Singh Parmar with the objective of seceding from India in order to form the state of Khalistan for Sikhs. The first Unit of BKI was founded in Canada in 1981. This organization has presence in the USA, Canada, UK, Germany, France, Belgium, Norway, Switzerland and Pakistan[5]. Babbar Khalsa International became a major participant in Khalistan movement under his guidance and participated in hundreds of operations against Indian security forces and remained active in several Indian states.[6]

The New York Times described Mr. Sukhdev Singh Babbar as the president of the Babbar Khalsa International, the best armed, most feared and most powerful of dozens of the militant groups in Punjab State that are fighting for an independent state for Sikhs, known as Khalistan[7]. During Khalistan movement, the very name of Sukhdev Singh Babbar, chief of Babbar Khalsa International, would strike terror in the minds of the police[8]

He died on August 9th 1992 when heavily armed policemen stormed a comfortable villa in the crowded city of Patiala in early August capturing, as quoted in the The New York Times, India's most wanted Sikh militant. [9], The circumstances of his death are disputed; it could be a Death, Murder or an Encounter. On his controversial death, he was described as the most prominent militant leader since 1978 "who had an aura of invincibility", his death severely weakened the BKI. [10]

'Faultlines' indicates India had to use the cat system (Special Forces personnel disguised as militants), to trap Mr. Babbar. He was captured with the help of a former Babbar militant turned police-cat, who informed on him in exchange for a reward of INR 1,000,000. This former militant helped trap Mr. Babbar by arranging a meeting of top Babbar militants, ostensibly to work out future strategy. For helping neutralize the chief of the most powerful militant group in the state, the turned militant also received a full third of the reward on Mr. Sukhdev Singh[11].

While leading the Babbar Khalsa Indian Security forces were so desperate to get information about him and his brother that they even traumatized their innocent family members. Amnesty International, reported that Indian Security Forces illegally detained (without-charge), beat and harassed his family members on various occasions to extract some information about Babbar Khalsa Leaders. His sister-in-law was once beaten so violently that the ligaments of her left arm and shoulder were torn, then her hands were tied behind her back and she was made to lie on the floor on her stomach. She was lashed with a whip and then interrogated. Policemen then placed roller planks on her legs and three men got up and rolled the planks up and down until she fainted with pain.[12].

In 1999, a “contempt of court proceedings” case against the Government of Punjab and officials of the Punjab Police was heard in the court of Justice V.S. Aggarwal, Punjab and Haryana High Court[13]. Finally his family members 'left their home and hearth' for an undisclosed location, reportedly in a foreign country.

A major portion of the ancestral house of the Babbar Khalsa chief was demolished, only a dilapidated two-room set, which is locked, remains. [14]

The Vancouver Sun has reported that in October, 1997, Mr. Sukhdev Singh Babbar alongwith Talwinder Singh Parmar were commemorated as Martyrs in a memorial service held at Surrey Sikh Temple on 132 Street, Surrey, British Columbia, Canada which was attended by hundereds of worshippers. It was addressed by acquitted Air India suspect Ajaib Singh Bagri.[15]