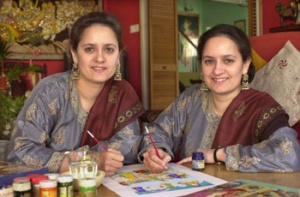 Amrit Kaur Singh and Rabindra Kaur Singh are Sikhs who have excelled as contemporary British artists of International standing. Their award winning paintings have been acknowledged by the British media as constituting a unique genre in British Art. They are both born in London to parent who are themselves are from India. Their father is a medical doctor who immigrated to North England from the Punjab in India. The twins have to be thanked for initiating a new movement in the revival of the Indian miniature tradition within modern art practice.

Although born in busy London, they moved to Wirral near Liverpool in England at the age of about seven. They were the only non-Christians attending a strict Catholic school called Holt Hill Convent in Birkenhead, Cheshire. The school is believed to have since been demolished.(in 1982) Even at the school, the artist streak of the twins was apparent when they were asked to prepare various posters and displays. This was one of those old-time institutions where discipline and good manners underpinned every aspect of school life. These traits were considered to be essential ingredients for a thorough, all-round education and as important to the individual student's development as academic instruction 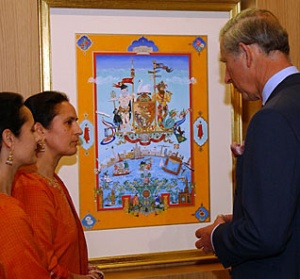 The twins with Prince Charles admiring one of there latest work

They had both planned to be academics, lecturing in their chosen degree subject of Ecclesiastic History and Comparative Religion. However, the prejudice they were confronted with while studying an elective in art at Chester College made them determined to prove their instructors wrong.

The Singh Twins employ traditional techniques used in Indian miniature painting to produce vibrant, exquisitely-detailed paintings that are a joy to explore. Some of the paintings are by a single twin – others are produced in tandem, with both painting simultaneously. The exhibition features works from the past seventeen years, as well as some new pieces.

The fusion of Asian and Western influence and their interest in global iconography has generated some fascinating juxtapositions in the Singh Twins’ paintings. This is both a reflection of their dual cultural identity and a clever vehicle for political and social commentary.

Their colourful, illustrative pictures cover a diverse range of challenging themes, from materialism and the cult of celebrity to politics. They question existing stereotypes and attempt to redefine narrow perceptions of heritage and identity in art and in society.

The Singh Twins’ work has an optimistic, decorative visual quality that captures the attention of the viewer and draws them in to the minute detail. Although their observations are often witty, closer inspection and interpretation reveals that they are dealing with themes of important critical debate.