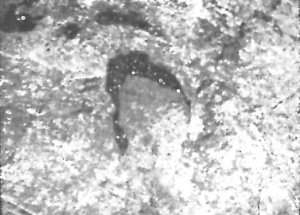 Footprint in stone, believed to be that of Guru Nanak. Chungtang, North Sikkim

In his lifetime Guru Nanak, the founder of the Sikh religion travelled to distant places and one such place was Tibet.

The Guru is well respected by Tibetan Buddhists who consider him a saint; the Dalai Lama, spiritual leader of Buddhists in Tibet, has confirmed it in his discussions with some Sikh leaders that Tibetans revere Guru Nanak as a Buddhist saint under the name of Guru Gompka Maharaj.

According to the local legends of North Sikkim, some people approached the respected Guru with an appeal for help. The lake had remained frozen during most of the year and rendered it incapable as a source of water.

Guru Nanak Dev ji is said to have touched the lake with his foot, and it has never frozen since. Guru Nanak's footprints, a robe and a water-carrying utensil are preserved in a nearby place called Lachen Gompha. Here the locals refer to the Guru as Rimpoche Nanak Guru who on his way to Tibet had rested there. .....More