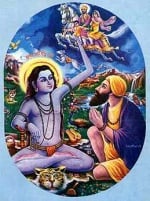 Sri Chand was born to Mata Sulakhani on 9 September 1494 (Bhadon sudi 9, 1551Bk) at Sultanpur Lodhi, now in Kapurthala district of the Punjab. He had a reputation of saintliness, and was respected and liked by all.

Bibi Nanaki who was his aunt took in Sri Chand and adopted him as her own son. This type of arrangement was quite common and accepted custom at that time. Sri Chand became a renounced yogi.

After his father, Guru Nanak left Nankana Sahib, Sri Chand stayed in Dera Baba Nanak and maintained Guru Nanak's temple. Later he established the Udasi order, both he and his followers travelled far and wide to spread the Word of Nanak.

When Guru Ram Das met Baba Sri Chand, the Baba commented that Guru Ram Das had the longest beard he had seen. Guru Ram Das replied, "It is to wipe the feet of the saints". .....More