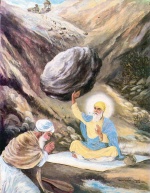 After travelling through Arabia and many other countries, in 1521 A.D during the summer season, Guru Nanak reached a place called Hasan Abdal.

This place is about fifty kilometres from Rawalpindi in Pakistan to the west side of the mountains. This is hilly area and some places here have natural fountains which flow from the ground.

Guru ji with Bhai Mardana and a small party halted at this place at the foot of a hill. Under a shady cool tree, Guru Nanak and Bhai Mardana started reciting Kirtan as was their normal practise. Slowly, the local devotees began to gather around the Guru.

On the top of the nearby hill, there lived a Muslim pir (priest). His name was Bawa Wali Qandhari. Wali Qandhari had established a celebrated dera (holy place) at this hill at Hasan Abdal, near a natural fountain. .....More