From SikhiWiki
< SikhiWiki:Today's featured article
Jump to navigationJump to search
India, shame on you! 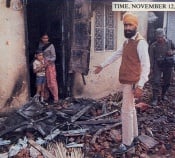 The indiscriminate brutal killing, jailing and abusing of innocent Sikhs in Delhi and other major Indian cities following the death of Prime minister, Indira Gandhi on 31 October 1984, should be a reason for great shame and sadness for the authorities and politician of India and for all people of the nation.

It defeats belief, that in a civilised society, during the modern era, that Sikhs who are a section of the community; a small minority at that, can be blamed and summarily punished without any trial or open examination, for the evil actions of just two individuals; this is absolutely beyond comprehension or understanding; it is behaviour belonging to the Stone Age.

Shame on you, India! You may have made some material progress in the last sixty years but the standards of justice and fairness in your country definitely belong to the dark ages.

This horrible event clearly highlights the very low level of morality, the non-existent level of spiritual awareness, a complete lack of compassion and .....More