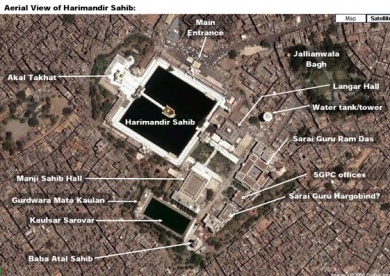 Harimandir Sahib is the most famous Sikh Temple or Gurdwara in the world. It is also called the Golden Temple in English because of the gold plating that covers most of its surface. This Gurdwara is found in the holy city of Amritsar in Punjab in North West India and is the sacred and the most visited of the many historic Sikhs shrines found in India and Pakistan. This striking building was built by the Guru Arjan Dev, the fifth Guru of the Sikhs.