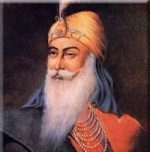 Maharaja Ranjit Singh (13th November 1780 - 27 June 1839) also called "Sher-e-Punjab" ("The Lion of Punjab") was the Sikh ruler of the sovereign country of Punjab and the Sikh Empire from about 1799. His Samadhi (memorial) is located in Lahore, Pakistan.

Maharaja was born in 1780 in Gujranwala in modern day Pakistan, into the Sansi-Sandhawalia family. At the time, much of Punjab was ruled by the Sikhs, who had divided the territory among factions known as Misls.

Ranjit Singh's father Maha Singh was the commander of the Sukerchakia misl and controlled a territory in west Punjab based around his headquarters at Gujranwala. Ranjit Singh succeeded his father at the young age of 12.

After several campaigns, his rivals accepted him as their leader, and he united the Sikh factions into one state and he took the title of Maharaja on April 12 1801 (to coincide with Baisakhi day), with Lahore serving as his capital from 1799. In 1802 he took control of the holy city of Amritsar. He brought law and order, yet was reluctant to use the death penalty. He stopped India's non-secular style and practises. He treated both Hindus and Muslims equally. He banned the discriminatory "jizya" tax on Hindus and Sikhs which had been imposed by the previous administration. .....More