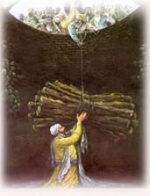 Bhai Manjh In the time of Guru Arjan Dev ji, there was a powerful and rich Jatt by the name of Teeratha. Teeratha was a follower of the Muslim sect of Sakhee Sarvar.

He was the local leader of this sect and had hundreds of followers who all respected him. Teeratha would regularly lead the members of this sect on a pilgrimage to the main Sakhee Sarvar shrine now in Pakistan

Once when passing through Amritsar, Teeratha decided to visit Guru Arjan. He had heard that there was a great Guru who had a large following and this Guru was spiritually enlightened.

He was curious to know who this Guru was and what he would say. He decided to stop off and see the Darbar of Guru Arjan. When he saw the Darbar, he saw that people of many different backgrounds, and castes were all sitting together and living in harmony. He also heard the kirtan in the darbar and the kirtan left a permanent mark on him. He heard of the great gift of naam and the thirst to have this gift rose within him. He was the leader of hundreds of "Sakhee Sarvar" followers but he could no longer follow that path. He realised that Sikhi was the path he must follow. .....More