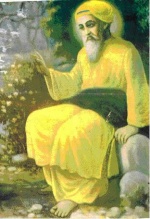 In the 15th century Sir Nicholas Bacon, a member of Corpus Christi College Cambridge gave modern science its first born son, in the days when Elizabethan England flourished at its peak.

When that son Francis Bacon (1561 – 1626), a member of Trinity College Cambridge became Lord Chancellor, the highest law officer in England, he was already recognised as a philosopher. He was endowed with the wisdom of universal thought. He then laid the foundation of modern science.

At about the same time Guru Nanak (1469 AD) who founded the Sikh religion, was doing the same and more in the sub continent. On the science front, Nanak told us the distance to the moon which is exactly what the scientists tell us today. He also disclosed that there are universes upon universes, and spheres upon spheres and many planets had existence like ours. .....More