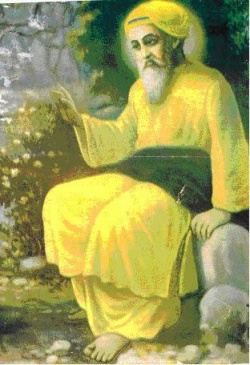 Based on excerpts from a forthcoming book by Sardar Anup Singh Choudry.

Where Guru Nanak (ਗ੝ਰੂ ਨਾਨਕ,1469 - 1539) and his teachings and accomplishments are compared with western science and the spread of Islam into India.

In the 15th century, Sir Nicholas Bacon, a member of Corpus Christi College, Cambridge gave modern science its first born son, in the days when Elizabethan England flourished at its peak.

When that son Francis Bacon (1561 – 1626), a member of Trinity College, Cambridge became Lord Chancellor, the highest law officer in England, he was already recognized as a philosopher. He was endowed with the wisdom of universal thought and went on to lay the foundation of modern science.

Galileo believed Copernicus's theory that planets orbit the sun. For his views, Galileo was placed under house arrest by the Inquisition as per the orders of the Holy Office of Rome. This conflict with the Church is a major early example of the conflict between authority and freedom of thought in Europe, particularly within science.

Galileo defied directives delivered to him by the Church not to hold or defend the idea that the earth moves and the sun stands still at the center. His book "Two new sciences" was to be the genesis of modern physics.

Prince Machiavelli (1469), an Italian statesman and political writer, showed an acute understanding of human nature, with such genius that it was regarded as the work of the devil. The research of William Gilbert and Vesalius called out the slumbering genius before reformation days, and then came Francis Bacon to call the training school of Europe.

It was a time of general awakening from the dark night of medieval ignorance. [Wikipedia:Savonarola|Savonarola]] and Martin Luther. John Knox and John Wesley, came into the general stir not so much to inculcate science, but to awaken the stupefied spirit.

At about the same time Guru Nanak (1469 AD), who founded the Sikh religion, was doing the same, and more, in the sub continent of India. On the science front, Nanak told us the distance to the moon, which is exactly what scientists tell us today. He also disclosed that there are universes upon universes, and spheres upon spheres ,and that many planets had existence like ours.

Our Astronomers have yet to discover these spheres, but they should be able to do so once the instruments of the telescope are further refined to see infinite distances.

While Christopher Columbus was voyaging the seas, Guru Nanak walked the land spreading his teachings in the same manner as had Jesus some 1400 years before. Though Jesus and Guru Nanak may have walked through some of the same territories, Guru Nanak's journeys were both longer and more widespread. In fact he walked enough to circle the earth 3 times over.

On the Social Front

On the social front Nanak challenged the Indian caste system, which was similar to the apartheid of South Africa, and which was the cornerstone of Hinduism in India at the time. He endorsed women’s rights and became a pioneer in championing the cause of women’s liberation; he promoted education for all men, women, and children by introducing the Gurmukhi script, simplifying the Devanagari script of the privileged upper castes, which became accessible to all and sundry people. Gurmkukhi it is the script of the Holy Adi Granth, all the Sikh scriptures, and it is the vehicle of written communication for the Punjabi language in India.

Guru Nanak introduced an agenda of reconciliation and community cohesion to make an inclusive society and a just world possible. He believed that integrity, respect, and trust between different communities would lead to dignity for all people.

Science of the Word, Naam

Guru Nanak's largest contribution to mankind was the teaching of "the science of the Word" (Naam). Naam, is unlike other science disciplines in that it is a perfect science, forming the subject matter of the 1430 pages of the Adi Granth, which were compiled and composed by the Sikh prophets – "The Ten Nanaks". The gift of Naam was the ultimate gift in the Sikh faith and has a very pure and special message for the whole world: by communion with the Word (Shabad) shall be attained the vision unattainable- the personal realization of God, and hence the sole and sure way to salvation. Sikhism is a monotheistic faith.

For the first time, [[Wikipedia:Asia produced a monotheistic civilization that was indigenous to its people. The people of the subcontinent were polytheistic in their outlook and beliefs, and the worship of gods, animals, and idols was an integral part of society at the time, and even today. Muslims called them [[Wikipedia:infidels or [[Wikipedia:kafirs and the bible described these non believers as Wikipedia:Heathens.

The Coming of Islam

The spread of Islam in North Western India in the 11th century had primarily been a result of military conquest - Islam spread at the point of a sword. The ancient Hindu and Buddhist temples and places of learning were destroyed en masse. New temples of the Islamic form of Monotheism, called Masjids, were built over the ruins and all too often were assembled from the very columns and broken walls of the old holy shrines.

This naturally produced reactions from the polytheistic and sensitive Indians, mainly Hindus, which resulted in seemingly impassable barriers of hatred and prejudice between world cultural currents. All of this has left irritating and unfortunate monuments of bigotry and misunderstanding, both spiritual and physical, that still haunt the Indian scene. 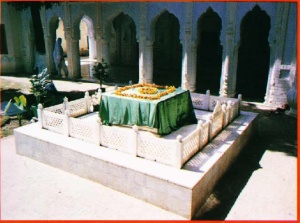 Kartarpur where Nanak breathed his last. The site is immortalized by a tomb built over the Muslim's flowers and the temple over the Hindu's flowers.

Sikhism shared a common spiritual bond with Islam with its monotheistic outlook and shared a cultural bond with Hinduism and Buddhism with an Indian cultural identity.

As a new born religion, Sikhism was to be the common meeting ground between these three cultural streams. This gives more meaning to the decision of Guru Ram Das to ask a prominent Muslim divine man to lay the foundation of the Golden Temple, which, in the embrace of the waters of Immortality (Amrit-saar), was intended to be a profound symbol for a future confluence of world cultures into a universal culture for all of mankind.

"In the House of Nanak, subscribe only to the Word (Naam)" (-Adi Granth)

Nanak was an embodiment of love. All creatures loved him. Snakes stood up to provide him shade when he was a young boy; lions and tigers wagged their tails in affection upon seeing him navigate the thick forests in their midst, it is said even the trees moved to provide him shade.

There is a story that says a boulder near Ladakh became miraculously plastic and enveloped the body of Nanak after it was rolled down at him by an evil demon which had haunted a local village.

All the peoples loved Nanak

People of all faiths loved Guru Nanak – Sikhs , Muslims , Hindus , Buddhists. On his death, flowers from both the Muslims and the Hindus were put over his body. The claim to his body was to go to that community whose flowers remained fresh the longest.

On the following morning, both groups of flowers remained fresh but surprisingly the body was missing - it had ascended to the heavens. The incident was a befitting reminder of his teachings to love God by meditation on the Word, the unstruck melody, and to not adore the physical body, and it is an ever more profound example to mankind of the futility of religious quarrel, for there is only one God for each and for all, and God cannot be personalized because out God created all the individual souls out of God's self.

Guru Nanak had reached heights of spiritual enlightenment rarely experienced at any age and his teachings have paralleled those in the Bible:

"In the beginning was the Word, and the Word was with God, and the Word was God. All things were made by him; and without him was not any thing made that was made. In him was life; and the life was the light of men. And the light shineth in darkness; and the darkness comprehended it not." (KJV - John 1:1-5).