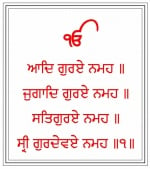 Sukhmani or Sukhmani Sahib is the title given to the Gurbani in raga Gauri Sukhmani in the Guru Granth Sahib which in turn appears in the major musical measure Raga Gauri to which it belongs.

It is a lengthy masterpiece, written by Guru Arjan Dev, the fifth Sikh Guru. The sacred prayer spans 35 pages from page 262 to page 296 of the Guru Granth Sahib.

Surprisingly, many ardent Sikhs include the recitation of this Bani in their daily regimen of Nitnem.

The physical site where, around AD 1602-03, the Guru composed this Gurbani was once enclosed by a dense wood. The location is still marked on the bank of the Ramsar pool in the city of Amritsar, near the famous Golden Temple or Harimandir Sahib.

It is said that Baba Sri Chand, elder son of Guru Nanak and founder of the Udasi order, came to Amritsar to meet Guru Arjan, then engaged in composing this Bani. The Guru who had by that time completed sixteen astpadis, or cantos, requested him to continue the composition.

Baba Sri Chand, out of humility, only recited the salok of Guru Nanak following the Mool Mantra in the Japji .....More