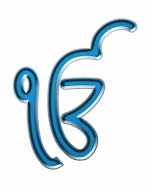 The Sikh religion has various established beliefs and values that are inherent in the basic philosophy of the faith. A Sikh's primary belief is in only one supreme God – This sole God is the same for all the peoples of the Universe.

Guru Arjan, the fifth Sikh Guru highlights this point by saying in the Sikh holy text called the Guru Granth Sahib, "There is only the One Supreme Lord God; there is no other at all" (SGGS p 45); this belief is the starting point of the Sikh faith.

Next, God is considered gender neutral in Sikhism. So when a Sikh refers to "God", this God can be referred to as masculine or feminine; so God can be called ‘He’ or ‘She’. Guru Arjan reinforces this concept by saying: "You are my Father and You are my Mother.....You are my Protector everywhere...." (SGGS p 103).

Further, this one God is the same God of the Sikhs, Hindus, Muslims, Christians, Jews, etc – of all the peoples of the world; everyone in this world belongs to that same one God! Guru Ram Das, the fourth Sikh Guru explains: "All living beings are Yours - You are the Giver of all souls" (SGGS p 10). .....More