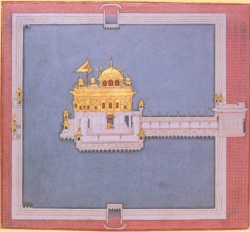 Sikh Gurdwaras Act, 1925 was a piece of legislation passed by the Punjab Legislative Council on 9 July 1925 which marked the culmination of the struggle of the Sikh people from 1920-1925 to wrest control of their places of worship from the mahants or priests into whose hands the Gurdwaras had passed during the eighteenth-century when the Khalsa were driven from their homes to seek safety in remote hills and deserts.

When they later established their sway in Punjab, the Sikhs rebuilt their shrines endowing them with large jagirs and estates. The management, however, remained with the priests, belonging mainly to the Udasi sect, who, after the advent of the British in 1849, began to consider the shrines and lands attached to them as their own personal properties and to appropriating the income accruing from them to their private use.

Some of them alienated or sold gurdwara properties at will. They had introduced ceremonies which were distasteful to orthodox Sikhs. Besides, there were complaints of immorality against them. All these factors gave rise to what is known as the Gurdwara Reform movement during which Sikhs had to court jail on a large scale and suffer atrocity and death to get control of key Sikh shrines.

The British government, who took the side of the priests, eventually relented under popular pressure and passed, in the first instance, Sikh Gurdwaras and Shrines Act, 1922, which envisaged a committee nominated by the government to take over control of the gurdwaras. This, however, was not acceptable to the Akali leaders and remained for this reason a dead letter.

The agitation continued and the government had another draft worked out. Akali counsel was sought this time and the principal demand about the shrines being handed over for management to a representative body of the Sikhs was conceded. The bill was moved in the Punjab Legislative Council by Sardar Tara Singh of Moga on 7 May 1925 and piloted by another Sikh member, Bhai Jodh Singh, eminent educationist and theologian.

The bill was, in the first instance, referred to a select committee which presented its report on 20 June. The Council passed the bill on 7 July 1925. It was published in the Punjab Government Gazette on 7 August 1925 and it became operative on 1 November 1925 as The Sikh Gurdwaras Act, 1925 (Punjab Act VIII of 1925).

The act, as its preamble declares, aimed at providing "for the better administration of certain Sikh gurdwaras and for enquiries into matters and settlement of disputes connected therewith...." The Act has three parts. Part I contains, besides preliminary matters such as title, extent and definitions, reference to gurdwaras covered by the Act, procedure for bringing other gurdwaras under its purview, and appointment of and procedures for a Gurdwara Tribunal.

Interestingly, the definition clause does not define a "Sikh gurdwara," but a subsequent clause, Section 2.10, lays down a "notified Sikh Gurdwara" as any gurdwaras"declared by notification of the local government under the provision of this Act to be a Sikh gurdwara." Chapter I of this part (Sections 3 to 11) and the schedules referred to therein are the vital part of the Act. Two categories of Sikh gurdwaras are envisaged, scheduled and unscheduled.

Important historical shrines where there could be no doubt about their being Sikh gurdwaras indisputably owned by Sikhs are listed in Schedule I of the Act. Originally 241 gurdwaras were entered in this Schedule, out of which 65 remained in Pakistan after the partition of the Punjab. However, 173 more gurdwaras within the state of Paṭiala and East Punjab States Union were added to it by the Amending Act of 1959. Schedule II contains the details of institutions which were not "Sikh" gurdwaras about the control of which no dispute could be raised.

In respect of gurdwaras listed in these two schedules or the scheduled gurdwaras as they are called, the State Government issued a notification in the official Gazette, declaring them to be Sikh gurdwaras. The notification also detailed the property claimed by each gurdwara.

In respect of the second category, i.e. gurdwĝrĝs other than the Scheduled Gurdwĝrĝs listed in Schedule I, Section 7 of the Act prescribes that fifty or more worshippers, being 21 years of age and residing in the area of the police station in which a gurdwĝrĝ is situated, may forward an application to the State Government, within the prescribed time, giving details of the property claimed to be of such a gurdwĝrĝ.

The State Government by notification publishes this application and invites objections, if any, from either an hereditary office-holder of that institution or at least twenty worshippers thereof to be filed within ninety days of the date of the notification. If no such petition is made, the Government issues a notification declaring that gurdwĝrĝ to be a Sikh gurdwĝrĝ.

An appeal against a finding of the Tribunal lies only to the High Court and has to be heard by a bench of two judges. The criterion for determining if the disputed institution is a Sikh gurdwĝrĝ or not is whether the gurdwĝrĝ was being used for "public worship by Sikhs" before and at the time of the presentation of the petition and if, in addition, the Tribunal finds that the gurdwĝrĝ established:

The solitary section 38 of Part II of the Act provides that if advantage of the procedure of Part I was not taken, recourse could be had to ordinary civil courts for obtaining a declaration that a particular institution was a Sikh gurdwĝrĝ. It being finally decided that The gurdwĝrĝ is a Sikh gurdwĝrĝ, the State Government issues the necessary notification and provisions of Part III of the Act relating to management of gurdwĝrĝs then become applicable to it. The Act also contains provision regarding settlement of disputes related to gurdwĝrĝ properties.

Part III of the Act provided for a central body for the management of Sikh Gurdwĝrĝs called the Gurdwĝrĝ Central Board, which at its first meeting, adopted for itself the name of Shiromaṇī Gurdwĝrĝ Parbandhak Committee (S.G.P.C. for short). The change of name was accepted by government and published through a notification dated l7 January 1927. The Committee directly manages certain important Sikh gurdwĝrĝs and supervises the working of committees of other gurdwĝrĝs, which are partly nominated by the Committee and partly elected by the electors of the district in which the gurdwĝrĝ is situated. Under an amendment made to the Act in 1987, all gurdwĝrĝs with an annual income of over 25,000 rupees are administered directly by the Shiromani Gurdwara Parbandhak Committee.

The Shiromaṇī Gurdwĝrĝ Parbandhak Committee consist of 140 members, including 15 belonging to Scheduled Castes, elected by Sikhs, which term includes Sahajdhĝrī Sikhs, not fewer than 21 years of age, who get their names entered in the electoral rolls by preferring declaration of being qualified to be voters under the Act. The head priest of Srī Darbĝr Sĝhib, and of the Takhts are ex-officio members.

The aforesaid members then co-opt fifteen members of whom not more than five should be the residents of the Punjab. An elected or co-opted member must be a Sikh, not less than 25 years of age. A person who trims or shaves his beard or head, except in case of Sahajdhĝrī Sikhs, smokes or takes alcoholic drinks, is disqualified to be member or voter. A Kesĝdharī member has to be an Amritdhĝrī. Other ministers and paid servants of the Sikh Gurdwĝrĝs or of the Board (now S.G.P.C.) are ineligible for election as members of the Shiromaṇī Gurdwĝrĝ Parbandhak Committee.

Normal term of the S.G.P.C. is five years but it continues in office till a new Committee is elected. Detailed provisions exist regarding such matters as the disqualification of members, meetings of the Committee, elections of the executive committee and other office-bearers and their respective powers. For the settlement of disputes relating to any act of the present or past members and the working of the Committee and for settling any complaint of malfeasance or misfeasance, a judicial commission of three members is appointed by the State Government.

SGPC and its functions

The Act contains detailed provisions regarding the finances of the S.G.P.C., and its committees. The General Fund not exceeding ten per cent of the total annual income is for the maintenance of historical gurdwĝrĝs with insufficient income. The surplus, if any, may be utilized for religious or charitable purposes or for social or general welfare of the Panth. Religious Fund is for the propagation of Sikh religion and connected matters.

Research Fund to which a minimum annual contribution of Rs 20,000 is to be made by the S.G.P.C. is for carrying out research in Sikh history and for publication of books. The Committee can also create and administer funds for specific purposes such as industrial or educational advancement of the community.

In the working of the Act, for over half a century, some defects found were corrected by successive Amending Acts. The most exhaustive revision was the one made by an amendment under Act XI of 1944. The mover of this amendment was Giĝnī Kartĝr Siṅgh, then a member of the Legislative Assembly of the Punjab.

Some of the more important provisions under it were : 12 seats in the S.G.P.C. were reserved for Mazhabī and Ramdĝsīĝ Sikhs ; tenure of the S.G.P.C. was increased from 3 to 5 years; employees of the S.G.P.C. were also made liable to legal action for misuse of official authority (formerly only members of the committee were so liable); plural constituencies for election to S.G.P.C. were abolished and replaced by single-member constituencies ; S.G.P.C. only was entitled to change the percentage of dasvandh or share in the income of gurdwĝrĝs under its control; government was to have no authority to interfere ; the S.G.P.C. was to be independent in apportioning the budget for religious preaching, charities, education, industry, etc.

Not withstanding the criticism of some of its provisions and defects in its actual working, the Act is a landmark, specifically excluding interference by the government and recognizing the right of the Sikhs to manage their gurdwĝrĝs through their elected representatives. Rituals and practices which were opposed to Sikh tenets and which were in vogue before the Act was passed in1925 have been set aside.

A demand for a comprehensive Act applicable to Gurdwĝrĝ all over India has persistently been voiced by the Sikhs. An All India Sikh Gurdwĝrĝ Bill for the management of the Sikh gurdwĝrĝs was drafted after consultation with Sikh representatives all over India by an Advisory Committee headed by Sardĝr Harbaṅs Siṅgh, retired Chief Justice of the Punjab, and forwarded to the Central Government in 1979.