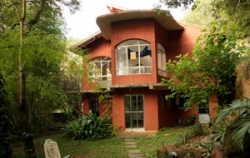 This Gurdwara is a tribute to the hard work and dedication of the Sikhs of Brazil and particularly Mata Subagh Kaur Khalsa and (late) Bhai Gurusewak Singh Khalsa, who literally spent a good part of 20 years to almost single-handedly conceive, plan and build the huge building for the benefit of the Guru's sangat in Brazil.

Subhag Kaur Khalsa, an American and her late husband, Gurusewak Singh Khalsa, a Brazilian moved to Sao Paulo in 1987 bringing with them the Sikh holy scripture, Sri Guru Granth Sahib. They set up a yoga center in their apartment and finally a separate Gurdwara in 2004. There are a few turbaned followers of Yogi Ji in Brazil. It is an experience to see them do “Ardas” in Punjabi followed by Portuguese translation. A friend, Arvinder Singh Garcha from London has a beautiful recording of a small group of these Sikhs with white turbans and flowing beards singing the Japji on a guitar on the Brazilian beach. Bravo! May the Guru continue to bless them. 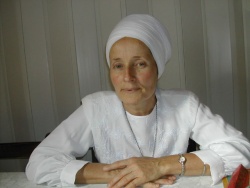 Interviewed on 1st September, 3.00pm in Sao Paulo, Brazil. Of special interest is the emotional process she went through before becoming a Sikh and her passion in propagating the Sikh dharma and the difficulties she is facing.

”It all started for me through yoga when I was 21. I was not looking for spiritual path consciously. I was looking for yoga. It makes you feel great and I felt good. During the next five years which I call my crisis years, I wanted to run away from the deep experience that yoga at 3HO was taking me to but I realized that I could not go away from it. So I decided to go to India and try to find another teacher who would not quite "shake me up" like Yogi Bhajan.

Before going to India, I went to Europe for a year mostly working with a 3HO French Group. During this period, I got to do Tantrik in Amsterdam and that is where I met Yogi Bhajan. It was a very penetrating experience, the white Tantra with Yogi himself directing. That was like another rebirth. It was hazy before the Tantrik experience and from that point on I was clearer as to who I was or what my destiny was.

It was the first time I put on the turban. It was at that time just an act of putting on the turban and taking it off. There was no association of my turban with my role. But after a few times when I took off the turban I started to feel strange. For another five years I was in turmoil of having turban and kirpan, etc. It did not feel logical.

Ultimately you have to throw the logic out of the window..... But that is kind of difficult to explain to the whole family. How do you explain to your mother who raised me as a Catholic and I had gone through whole Catholic tradition. Over the last twenty years they have started to respect my spiritual choice.

On return from Solicites, I went to India. I was still trying to get away. I had some deep experiences but I was still on the run. In India I did meet some other spiritual teachers and I had the opportunity to switch. But there was no switching for me and it was in India that I finally made a commitment to Yogi Bhajan and Sikh dharma. I joined the Ashram in USA on return. Till that time (I was thirty), it was just a question mark for me in matters like why would any one want to have children. However on return it ignited in me to be a mother.

Yogi Bhajan had given a formula as to how to find the right mate. He said there are two ways to go about this. One is you can go out and find which is what I was doing. This was not getting me anywhere. The second option is to sit where you are and do a very intensive "sadhna" and attract the person. This seemed such a far out thing.

I was a sort of feminist and the idea of waiting, radiating and attracting and not doing any thing was a whole new game plan. Nevertheless I decided to do this. I started to do daily a 2-hour sadhna. Soon after joining the Ashram I met an acquaintance who asked me to pick up a friend of her at the train station. This was Gurusewak whom I ended up marrying. (Big Laughter).

He spoke English really bad (Brazilian). It was difficult to communicate. His packaging was different from what I usually went for. He was short and a bit plump. He was not quite yogic looking but he had a beard. He was a Healer. I had lost a lot of weight while I was in India and my metabolism was not good. I was not having my periods. I never go to see Healers.

But for three months I had not had my periods, and made an appointment for a forenoon session. And that morning, I had my periods. I kept my appointment and told him that I had a reason for the appointment but I do not have that any more. So I do not know why I am here. Well, he laughed and had a huge smile. He said let us go for lunch and that’s where he asked me to marry him.

My husband was forty and I was thirty. At the first possible opportunity, we met with Yogi Bhajan when my husband asked for his approval. He had a huge smile on his face and said “Blessings, Blessings”. He looked at me and said you get him back to Brazil - he does not belong here. So here it was! My destiny was signed, sealed and delivered. He said to us that you would do in South America what I did here.

Commitment to the Guru

The very enormity of the task created a lot of personal stress but the good part was that we made the commitment to put up the Gurdwara. Before getting married in December 1984, Yogi asked me to take “amrit” which I did. We had our first baby girl in the Ashram. To keep our commitment to Yogi Ji, we moved to Brazil when our daughter was 11 months old.

My husband was uneasy in coming down at that time as Brazil was going through financial and political uncertainties. We were trying to have some money before moving. I guess we had only about $3,000 that was all the cover we had for the future.

The first Gurdwara in Brazil!

My husband had an apartment in Sao Paulo and we made a commitment to build the Gurdwara. So we brought the Guru and installed it in a very small closet in our first apartment. That was our first Gurdwara. Later on we moved to this beautiful place a little distant from centre of the town.

My husband worked very hard to get us established here. He continued to go back to USA twice a year to carry out his healing work. Every time he returned he will bring back $ 5-6000. One time he brought back $10,000. Basically that is how the Gurdwara and the Ashram got built. In the mean while kids kept coming, Hari Simran Kaur, Ajit Singh and then Gobind Singh.

We were training teachers to reach more people quicker. A lot of 3HO followers in USA were shy of introducing Sikh dharma. They questioned whether they were getting a religion or yoga which was their interest. I can understand that very well. But we present this as “Bhakti” yoga with kirtan. This is an experience of meeting the beloved.

So we founded Kundalini and Sikh dharma together. So until this day Gurdwara is a part of teacher training. We certify the people in front of the Guru and that’s been our way. We had more women but still had a good share with men say in 3 to 2 ratio. Yoga started to grow but slowly. On personal side we were five of us with three rooms only including one for Gurdwara.

Separate building for the Gurdwara

This pushed us into the Gurdwara project outside the residence area. In 1999 we broke ground for the new Gurdwara building. Two weeks later, our neighbor approached on his own to offer to sell his land which my husband had always wanted to acquire. With more space available the design and structure had to be changed. The first floor was 80 percent complete by December, 2000. My husband suggested to me to visit my mom as she had not seen our two sons.

Although we had literally no funds available, we went to the USA in January, 2001. My husband was going to spend two weeks with us and then go for his healing job. Next morning at my mom’s house my husband said he wasn’t feeling well.

Two weeks later we found out that he had prostrate cancer. He was given 2-5 years. Me with three kids and Gurdwara only 80% complete and him not having much time to live! We didn’t know what to do unless the Guru decided to do some thing. We spent eight months in the States.

The Guru opened all kinds of doors for the treatment. That was miraculous. We did not even have health insurance. Somehow or the other my husband started feeling good. Later, on our return to Brazil, his health began to deteriorate. I started to get this message from above that this Gurdwara needs to get going. I didn’t want to deal with this on my own and hence I told him that we had to move on to the Gurdwara project to which he agreed.

So we started the construction of the second floor which was the Gurdwara proper. Last year was a very bad year with Gurdwara construction going on and his health deteriorating. He held himself in the body until inauguration in June of last year. You have seen the photos of inauguration. He held himself somehow or the other till 17th August, 2004 when he left his physical form.

In the meanwhile, the Sangat has taken over my kids as we had no money. At the Council meeting someone offered to help send the two boys to go to Amritsar, Miri Piri School. Our daughter was over age and hence she has gone to the Ashram in USA. So the kids will get the benefit of sangat which they were missing here.

We have trained a total of about 150 teachers. There is an article which appeared in the Yoga magazine of Brazil which has covered our activities. This would help. The Gurdwara is facing practical issues as there are hardly any followers. Another couple has the Sri Guru Granth Sahib in their home in Sao Paulo. Other than that there is no activity.

The task assigned to my husband of propagating Kundalini and Sikh dharma is now in my hands. In South America there is some progress in various countries. Although much is not happening but I see myself as the guardian of Sikh dharma in Brazil. I hold a position internationally as a guardian of Kundalini yoga. I participate in the Group international meet twice a year. I am playing my role here to best of my ability and resources. Rest is up to the Guru.

PS: I have just heard from Ms. Kuvinder Kaur, Sao Paulo that the Sikh community have had a gathering at the Gurdwara and are aiming for a monthly Sangats