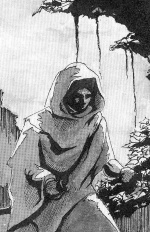 The Sakhi of this great Sikh woman starts from the very day of her marriage. She was born in a Hindu family in the Pathan country on the west of the Punjab. The area was under the Sikh Raj and ruled by General Hari Singh Nalwa. After a happy marriage, she was going along with her groom and the marriage party to the village of her in-laws. On their way, the dacoits ambushed them. Waving their arms, the dacoits ordered all the people to surrender their cash and valuables. The helpless party gave everything to the robbers to save their lives. The decoits, however, also demanded the newly married bride and took her with them.

The poor groom went straight to General Nalwa, who was then the governor of the Pathan province. While the General sitting in his court was listening to the complaint of the groom he observed two persons behaving suspiciously near the door. He suspected them to be the friends of the dacoits. After the man had completed the story of the party being way-laid by the dacoits and the loss of his wife, the General ordered aloud to be heard by those suspects, "Put this man in the prison. He did not care to protect a helpless woman, who was his own wife.". The two suspects who were actually the associates of the dacoits and were there to know the reactions of the General, were pleased to hear the order.

They were relieved of the fear of any policemen going out in search of the dacoits to catch them. The vigilant eyes of the General observed a smile on the faces of the suspects when they heard his decision. This assured the General of their complicity in looting the marriage party and carrying away the bride. The General secretly ordered ten Sikh horsemen to take the husband of the stolen woman with them and follow the suspects.

When the bride was brought before Sardar Nalwa he asked her, What is your name? She replied, I am nobody. I would have been dead had you not saved my life. Now I am under your ‘sharan’ (protection). The word ‘sharan’ voluntarily coming out of the mouth of a helpless, scared woman gave her the popular name Sharanagat Kaur.

When everything was restored to them, the General asked the bride and groom to go home. Both begged the Sardar to admit them to the Khalsa Panth. They wanted to enjoy the honour of living as Sikhs and dying as Sikhs. On their very firm resolve to become the members of the Khalsa Panth, they were given Amrit and allowed to stay there with the General.

Once Hari Singh Naiwa was visiting Jamrod Fort. He fell seriously ill there. The area was surrounded with the Pathan population unfriendly towards him. Knowing that the General was sick and not physically in a condition to do battle, they all rebelled against his rule. To send the message that he was hale and hearty, the General went up to the upper storey of the fort to inspect a repaired wall, from where he could be seen by all the people outside the fort. Seeing him moving about on the fort, the rebels retreated quickly. However, one of them aimed his gun at him and shot him before he went back. Unfortunately, the General was hit and died of the bullet wound.

The situation in the fort became very tense and everyone was depressed finding their General dead, and with no one there to replace him. Bibi Sharanagat Kaur kept her composure, thought for some time and said, This is not the time to feel worried or to get scared. Let us face this critical moment with courage and confidence. I have a plan to save the situation. You drop me behind the fort by a long rope. I, disguised as a Pathan woman, will reach Peshawar as soon as possible and inform the army there.

She had to travel through a hilly route that covered twenty miles, swarming with Pathan rebels. There were wild animals in the forest through which she had to walk at night, and she could easily become their prey. It was a very risky journey. It looked impossible for her to reach Peshawar alive and give the sad news to the army and to request their help.

The brave, daring young woman did reach there by walking or running the whole night, through dense forest. Without losing any time, she asked the best horsemen to get ready quickly and ride their horses. Sikh soldiers under the guidance of Bibi Sharanagat Kaur travelled as fast as they could to reach Lahore. They covered their long arduous journey quickly and reported the episode to Maharaja Ranjit Singh. After hearing of the death of a great General who raised the honour of the Khalsa army to the skies, he felt very sad. Assessing the situation to be critical, he himself left for Peshawar. Knowing that the Maharaja had personally come to punish the rebels, the Pathans immediately surrendered without fighting and promised to remain friendly thereafter.

The Khalsa Raj of Punjab, founded with the statesmanship of a woman, Sardarni Sada Kaur, was thus saved from being dismembered, by the bravery of another woman, Bibi Sharanagat Kaur. She was honoured by the Khalsa Panth with the title of "Brave daughter of Punjab". Sikh women can face successfully all kinds of critical and risky situations, like any good General and Statesman.