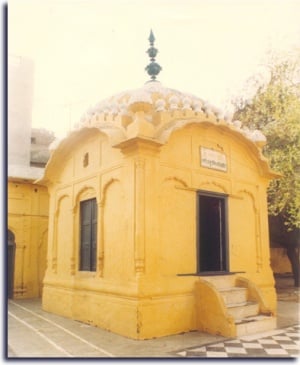 Shahidi Asthan of Bhai Taru Singh Ji is situated in Naulakha Bazar. Bhai Sahib had looked after his widowed mother, and his sister by his sheer honest earnings and even helped other needy Sikhs as well. The rulers of the time always disliked these compassionate deeds of his. Falsely charged he was imprisoned and first offered temptations and reward if he would denounce Sikhi and become a Muslim. He was tortured next, but even then he did not budge, remaining steadfast in his beliefs.

The Qazi then passed a decree, ordering that he be scalped alive. At this place, as Bhai Taru Singh's scalp was removed with a hoe, he kept repeating Waheguru.

On 13th Asu, 1802 BK. or 16 July, 1745 Bhai Taru left for his heavenly abode but as he had exclaimed, Zakariya Khan died earlier. The devotees had a Gurdwara built at this place.

During the Sikh Raj of Maharaja Ranjit Singh, a large Jagir was granted to this Gurdwara. When, in the 1920-30s, the management of this shrine was taken over by the SGPC, the rendering of service to this holy place went to Bhai Asher Singh, who later became the Jathedar of Sri Akal Takhat.

Due to distinguished qualities of Bhai Sahib, it earned great importance, but after partition, Sikhs, under the threat of certain death, had to abandon this holy shrine. This historic Gurdwara still exists, but its management is now with the Pakistan Waqf Board. 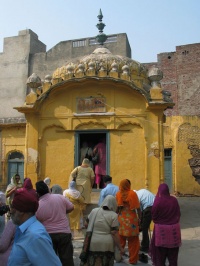 The Place where Bhai Taru Singh's was scalped
Retrieved from "https://www.sikhiwiki.org/index.php?title=Shahid_Ganj_Bhai_Taru_Singh&oldid=76987"
Category: