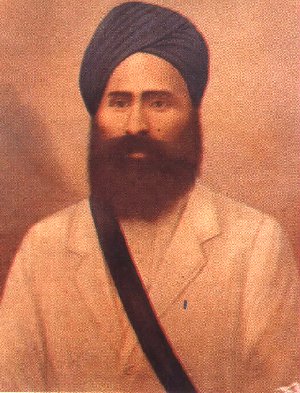 Teja Singh Samundri (20 February, 1882 - 17 July, 1926), a leading figure in the Gurdwara Reform Movement and a founder member of the Shiromani Gurdwara Parbandhak Committee was born the son of Deva Singh and Nand Kaur at Rai ka Burj in Tarn Taran tahsil in Amritsar district. He moved with his family to a newly developed colony, after land was assigned to his father, in the Sandal Bar tract of tahsil Samundri of Lyallpur district, Punjab (now in Pakistan).

Teja Singh's formal education did not go beyond the primary stage, but he was well equipped in the Sikh religious and historical texts. Following in his father's footsteps, he joined the army as a "Dafadar" in 22 Cavalry. But his army career lasted only three and a half years. He returned to his village which was then called, Chak 140 GB, to devote himself to the promotion of religious and social reform in the panth.

He became a member of the Chief Khalsa Diwan and helped to establish the Khalsa Diwan Samundri. Later this and other similar societies working in that area were, through his initiative, knit into a bigger organization called the Khalsa Diwan Bar. For the education of children, he established two schools; Khalsa Middle School in his village and Sri Guru Gobind Singh Khalsa High School at Sarhali in Amritsar district. Some more schools were opened under the auspices of the Khalsa Diwan Bar.

After taking interest in the Akali movement, he was one of the founders of the Sikh daily newspaper, the Akali. He organized public meetings to protest against the proposed demolition, by the government, of one of the boundary walls of Gurudwara Rakab Ganj Sahib at Delhi and was one of the 100 Sikhs who volunteered to lay down their lives in a bid to have it restored. He was nominated a member of the committee appointed to administer the Nankana Sahib Gurdwara after the tragic happenings of 1921.

He was among the founding members of the Shiromani Gurdwara Parbandhak Committee of which he later became Vice president. He was also Vice president of the Punjab Congress Committee. From November 1921 to January 1922, he suffered imprisonment for his part in the agitation concerning the keys of the Golden Temple treasury, which had been taken into possession by the government.

On 13 October 1923; he was arrested in connection with the Jaito Morcha. He was among those Akali leaders who refused to secure their release by giving government the assurance that they would work by the Sikh Gurdwaras Act passed on 9 July 1925.

Among his contemporaries, he was widely esteemed for his qualities of character and dedication and for his talent for organization. The handsome Teja Singh Samundri Hall in Amritsar, which houses the head quarter and offices of the Shiromani Gurdwara Parbandhak Committee, the main religious organization of the Sikhs and part of Golden Temple complex was named after Teja Singh Samundri.