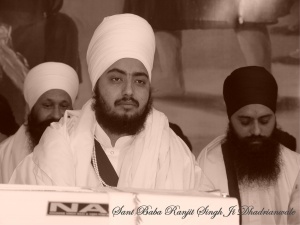 Baba Ranjit Singh Ji Dhadrianwale (Nirvair Khalsa Dal - Gurdwara Parmeshar Dwar Sahib Patiala), is believed to have been born in July 1983 in Punjab, India. Since a very young age he has followed the path of Sikhi and has a deep understanding of the holy scriptures. Unlike many other educators of the Sikh masses, as a young person, he has tirelessly been doing a consistent and influential form of Sikhi Parchaar (preaching), predominantly centralized in the Punjab.

His message, in an effort to stop both young and older Sikhs from falling prey to the anti-Gurmat diseases of drug, alcohol and tobacco abuse, which are out of control in the state of Punjab, India. His message is simple, clear and delivered in the "sant-maata" (simple, basic) manner. The kirtan is not in the traditional classical raag form but in the simpler tradition of the sant tradition which has been practised in the sant-panth tradition by such strong figures as Sant Baba Nand Singh and Sant Baba Isher Singh.

Bhai ji has a strong following due to the fact that his message is kept simple and delivered in language which the average person living in rural Punjab can understand and relate to. The Bhai ji's chief aspiration is for the Sikh masses to receive Amrit, to follow the pure life of the Khalsa (Thatt(h) Khalsa Gurmat Rehat Maryada) and for all to develop into examples of the Khalsa Saint Soldiers of Guru Gobind Singh Sahib Ji Maharaaj. 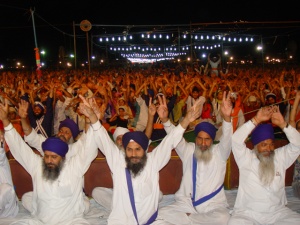 In Gurmat Parchaars (mass gathering) which are organised all over Punjab, all over India and all over the world, where many thousands of the common people attend, the aim of the mission is clear — for Sikhs who have gone astray, to be aware of and stay away from the fake, false, self-proclaimed “God-men” who claim to be "living Guru’s" and instead to follow, acknowledge and accept the the path shown by the Sikh scriptures, the Sri Guru Granth Sahib Ji Maharaaj as the only absolute, supreme and eternal living spiritual Master Guru (teacher) of the Sikhs.

Massive Diwans, where in some cases congregation of about 100,000 attend, in the presence of Sri Guru Granth Sahib Ji Maharaaj are organized, by the Sangat, in large fields of several acres, which the Guru's Sikh Sangat attend in mass assembly.

On the religious stage Bhai Ranjit Singh Dhadiranwale has always publicly stated that no one should do "matha tekh" (bow down) to him and that the congregation should do "matha tekh" (bow down out of respect) to only the Guru Granth Sahib Ji. However, in the early days, controversy had built around his use of Gurbani and his style of Kirtan had led to accusations that he sings “Kachee Baanee” (distorted or literally "weak" Gurbani).

Furthermore it had been suggested on certain radio stations and by some Gurdwara organisations that Ranjit Singh is concerned only with collecting money for himself and that he is a “fake holy man”. This has been largely proven wrong as he has continued to dedicate himself to the panth and has not been trapped by the "comforts of money and huge donations".

Further, a video was discovered by the Sikh Sangat and put on youtube of Bhai Ranjit Singh, which showed him wearing a Kalgi (plume), and sitting on a high seat. On the wall behind him was a large painting of himself, and in front of his seat was a plastic basket. The video showed how Sikhs visiting him put money in the basket, give presents and then matha tekh to him.

In this video, Bhai Ranjit Singh showed no hesitation when the Sangat matha tekhs to him. He blessed those who bow to him by patting them on the head or back. The video showed Ranjit Singh casually sits on his seat and sometimes showed little or no interest in those who bow to him with faith, dedication and trust (shardaa). He has since apologised for this behaviour and by and large the panth has accepted this and put it down to his young age. 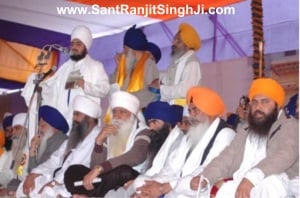 Presently, he has a large following throughout the Sikh community worldwide and his religious events attract substantial following both in Gurdwaras and in his rural outdoor gatherings; as well as his TV broadcasts. He continues to dedicate his life and energies to spread the message of the Sikh Gurus. His popularity continues to grow amid the young and old in Sikh society. His simple way of conveying the message of Gurbani in basic, everyday Punjabi appeals to the masses.

Many of his religious events are broadcasted worldwide and CDs and DVDs of these events have been made and distributed to Sikh communities in Punjab and abroad. Many thousands have taken Amrit and become full fledged members of the Khalsa panth after listening and being influenced by his discourses; many have given up the cancerous habits of taking drugs and other intoxicants and now live healthy and purposeful lives. Bhai Sahib has successfully made a uplifting effect on the masses in Punjab who were without leadership and subject to external political manipulation.

He participated in almost every protest march whenever there was an assault on sikhi. One singh of his jatha was hit by a bullet in the protest against Dera Sacha-Sauda. It is said that the bullet was aimed directly at Bhai Ji but this Singh pushed Bhai Ji and took the bullet on his own shoulder.

Predominately, Bhai ji brings home to Punjab the fundamental message of Guru Nanak and the values and benifits of leading a spiritual life as narrated in the Guru Granth Sahib.

May17th, 2016 - Some unknown person armed with guns made a brutal attack on Bhai Ranjit Singh Ji khalsa on the way to a congregation to Ludhiana. This pre-planned assassination attempt was executed in disguise of volunteers serving "Chabeel".One of Bhai Sahib's fellow preacher Bhai Bhupinder Singh Khalsa was sitting on front seat that day, where usually Bhai Ranjit Singh use to sit himself. The shooter was mistaken with similar attire and fired a close shot on Bhai Bhupinder Singh thinking that he is Bhai Ranjit Singh.

At the very same moment, about 10-12 other men armed with guns, axes, swords and bars were also attacking all the cars of Bhai Sahib Bhai Sahib's cavalcade. His driver got his Toyota Land Cruiser away from the place despite all the car tyre were deflated by gun shots. The attacker group followed the car, still shooting on Bhai Sahib's car. They managed to dodged into fields, left the car and took shelter in an under construction school building. Bhai Bhupinder Singh was dead by then. The police was called from that place.

Police has been a failure so far with this case and could not made a solid case against the culprit due to political pressure.

Baba Ranjit Singh has contributed quite a much to sikh panth at young age of 27year (as-on July, 7th 2010). He took Amrit-Sanchar as his primary mission and accomplished it by participating in many kirtan events throughout India and abroad. As on records, his jatha has baptized more than 6,50,000 sikhs in Amrit-Sanchars. The largest number of sikhs baptized in a single event was 10,500+. He preached majorly on how religious code (sikh-rehit) can improve a sikh's social, moral and spiritual life. He often uses stories from sikh-history as examples.

He encouraged sikhs to respect Guru Granth Sahib by heart. In his kirtan-events, gathered sikh audience do not leave or make any disturbance during the event and stay until Guru Granth Sahib leave the place after completion. A well-designed Gurdwara Building named 'Parmeshar Dwar' is built on Patiala-Sangur highway. 24-hour free-kitchan (langar) is available for anyone visiting the Gurudwara. Above 100,000 people gather on monthly samagam that is held on first Saturday of every month. An Amrit-sanchar (Sikh Initiation) is organized during this samagam.

A free mass-marriage ceremony is organized on annual basis. Poor people who can't manage marriage expanses for their daughters can register for this ceremony. The Gurdwara arranges the marriages on their expanse and even provide common household articles. Gurdwara provides cloths, bed & bedding , watches, stoves, trunks and other household things to the newly wed couple to start a smooth married life.

A totally-free hospital is also being planned in the premises where the patient will not have to pay even the registration fee. Consultation and medication will be provided at no-cost. This hospital will be serving about 50 nearby villages. A sarovar, and school will be the next. 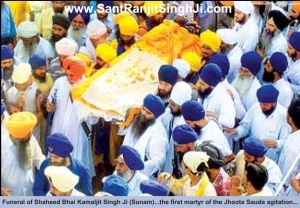 Baba Ranjit Singh Ji Dhadrianwale and Jatha, with Panthic leaders, at the funeral of the first Shaheed of the Dera "Sacha Sauda" agitation in 2007, Shaheed Bhai Kamaljit Singh Ji (Sunam)

The "Truth" about the "Controversy"

Here is the "truth" about Baba Ranjit Singh Ji Dhadrianwale...

Visit the following websites for some information about Baba Ranjit Singh Ji Dhadrianwale, as well as their Gurmat Diwaan recordings...