From SikhiWiki
(Redirected from River Beas)
Jump to navigationJump to search 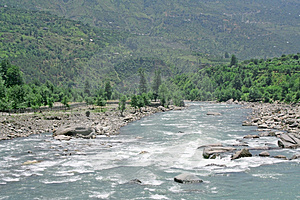 River Beas, one of five rivers of Punjab

One of the “five rivers” that give the Punjab its name, the Beas river rises in the Himalayas in central Himachal Pradesh state and flows for some 290 mi (470 km) to the Sutlej River in western Punjab state. The river was also known as Arjiki or Vipas to the ancient Indians and the Hyphasis to the Ancient Greeks. The present name 'Beas' is thought to be a corruption of the word 'Vyas',the name of Veda Vyasa, the author of the great Hindu epic, the Mahabharat.

The river is sometimes also referred to as 'Vipasha'in Himachal, especially by the scholars. The Beas River marks the eastern-most border of Alexander the Great's conquests in 326 BC. The river begins at the Rohtang Pass in the state of Himachal Pradesh, and merges with the Sutlej at Harike Pattan south of Amritsar in Punjab, India. The Sutlej continues into Pakistani Punjab and joins the Chenab River to form the Panjnad River; the latter joins the Indus River at Mithankot. The waters of the Beas and Sutlej rivers are allocated to India under the Indus Waters Treaty between India and Pakistan.