The Rakhrhi is not Sikh ritual, It's practice does not fit sikh philosphy 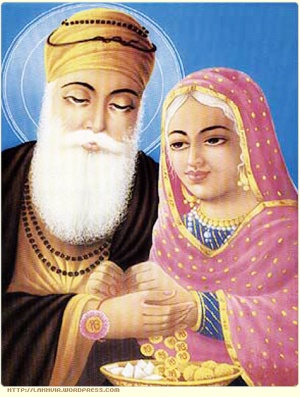 ????? This is nothing more than a work of fiction.

Raksha Bandhan (the bond of protection in Hindi, Punjabi, Oriya, Assamese and most other Indian languages) is a Hindu festival, which celebrates the relationship between brothers and sisters. It is celebrated on the full moon of the month of Shraavana (Shravan Poornima).

The festival is marked by the tying of a rakhi, or holy thread by the sister on the wrist of her brother. The brother in return offers a gift to his sister and vows to look after her as she presents sweets to her brother. The brother and sister traditionally feed one another sweets. It is not necessary that the rakhi be given only to a blood brother; any male can be "adopted" as a brother by tying a rakhi on the person, that is "blood brothers and sisters", whether they are cousins or a good friend. Indian history is replete with women asking for protection, through rakhi, from men who were neither their brothers, nor Hindus themselves.

No Place in Sikhism

As the festival of Raksha Bandhan approaches each year, it’s no longer strange to see Sikhs lining up to purchase these threads to tie on the wrists of their brothers and fathers, in return for blessings and gifts. What was originally a Hindu festival has been ignorantly been accepted in Sikh culture, without prior thought to what it is all about and why our Gurus would never support it. Instead, Manmat has only taken lead, with the explanation that it is the day dedicated to the bond of a brother and sister, and an excuse to pamper each other.

According to the Hindus, this is how the day is marked, ‘As per the traditions, the sister on this day prepares the pooja thali with diya, roli, chawal and rakhis. She worships the deities, ties Rakhi to the brother(s) and wishes for their well being. The brother in turn acknowledges the love with a promise to be by the sisters’ side through the thick and thin and gives her a token gift.’

Festivals like these are beautiful, no doubt, but in Sikhi, what we do – or do not do – is sanctioned only by the Guru. Nowhere in Sikh history has any Sikh Guru known to have accepted this Hindu custom. In a painting I came across on a website, Guru Nanak Dev Ji is being depicted to have a raakhi being tied on his wrist by his sister Bebe Nanaki. This is nothing more than a work of fiction.

The Guru, who rejected the spiritual thread that the Hindu Brahmins consider makes them connected to God, in the midst of all the learned Pandits, Brahmins and his own father, would that same Guru accept the far more earthy thread called a ‘rakhi’? It’s plain logic, he wouldn’t. When asked by his father to go forth and make a profitable bargain in business, young Nanak came back having spent all his given money on feeding starving fakirs. If Nanak could challenge the Brahmins and reject outright the janeu, would he want to contradict himself by accepting another thread? The painting above may have been done by a devotee of the Guru and was only imagining the love between a brother and a sister, but didn’t realise that it is against the Guru’s own philosophy. If the Guru’s life is studied closely, and compared with his hymns, one can deduce for oneself whether the Guru would say something and preach something else. Likewise, no other Sikh Guru subscribed to the rakhsha bandhan ceremony, it was just not a Sikh practice, be it religious or cultural.

‘So what’s the harm in commemorating the day?’, is the usual counter-arguement of those Sikhs that accept the practice. There’s no harm in doing any of these things, but our Guru just did not approve them for his Sikhs. He’s taken us out of all the clutter of all those things that have no meaning in Sikhi and have instructed us to focus more on God than on worldly funfairs that eventually take the mortal away from God. The heritage of the Sikhs is so unique, that the men and women have been given an equal status.

Why would a Khalsa Kaur ever need anyone’s protection when they have the power within them to defend themselves? That is why if the Singh was given a Kirpan, so was a Kaur granted the same. When the 40 Sikhs abandoned the Guru in his time of need, their wives took away their mens’ weapons and horses and left their husbands home to take their place. It was a proof of the might of the Guru’s daughters – that they are as mighty, or even mightier, than men. ‘Truth is high,’ Guru Nanak Dev Ji said and, further added, ‘but higher still is truthful living.’ So how can a mere thread prove the love between a brother and sister. Will that thread not wear out too, just like the janeu?

Sikhs were blessed with the roop of the Guru so that they may emulate their example of life and living which would connect us to Waheguru. Ceremonies like rakhsha bandhan are good for those for whom it was made, for the Hindu faith has it’s own valid reasons. Sikhi is a completely distinct faith. And how? Guru Nanak did not accept the janeu; he rejected the offering of water to his ancestors; he did not recite the Hindu Vedas; nor prayed to the 330 million gods, but contemplated only on the SHABAD what was revealed to Him from the Court of the Lord. Likewise, the other Sikh Gurus further developed what Guru Nanak preached, they never contradicted Nanak’s message and way of life.

In conclusion, while the ceremony is a beautiful one, it simply has not place in Sikhi because it is not higher than the Sikh way of life. The simple thread that is meant as a prayer to protect a sister and to seek the blessings of the brother’s long life and wellbeing, is not any higher than believing that it is Akaal Purakh that protects and blesses His beings. A thread is just an illusion, a Sikh of the Guru has no need for it to be reminded of his duty to the world, otherwise our Gurus would have allowed us to adopt it. And what of those who have no brothers? Who will protect them? What of those who have no sisters, who will pray for their long life and wellbeing? It’s all out of logic for Sikhs.

Rakhsha Bandhan is good for the Hindus, the Sikhs have their own beautiful way of life, made as simple as it could ever have been so that we can connect more to the Divine, and detatch more from the illusionary world.