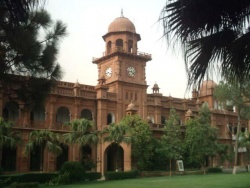 Punjab University Lahore now called The Jamiah Punjab colloquially known as Punjab University, is located in Lahore, Punjab, Pakistan. The University of the Punjab was formally established with the convening of the first meeting of its Senate on October 14, 1882 at Simla. It was the fourth university to be established by the British colonial authorities on the Indian subcontinent (the first three universities were established by the British rulers at their initial strongholds of Calcutta , Bombay, and Madras).

The University of the Punjab came into existence as a result of a long drawn struggle of the people of Punjab after the Indian War of Independence in 1857. Joseph Lwe was the founder of the university. Contrary to the three previously established universities, which were only examining institutions, the University of the Punjab was both teaching as well as examining body right from beginning.

From its formation in 1882 until 1947, the University of the Punjab served the educational needs of the entire region of pre-partition Punjab and northern India. Mohindra College, Patiala was the first college of higher learning to affiliate with University of Punjab in 1882; followed by St. Stephen's College, Delhi. The partition of India in 1947 reduced the geographical jurisdiction of the university. The current Institute of Administrative Sciences was created in 1962.

Many major institutions that were previously affiliated to Punjab University have now become independent universities on their own, such as Government College University and Medical and Engineering Colleges.