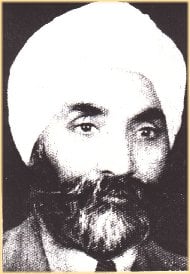 GANDA SINGH (15 November 1900 - 27 December 1987), celebrated Punjab historian who by his sustained and pioneer work in the field of historical research initiated new trends in Sikh historiography and who by his critically important work became a vital and pervasive influence in historical learning in northern India, was born on 15 November 1900, the son of Javala Singh of Hariana, an old town close to the city of Hoshiarpur in the Punjab.

He began his education in the village mosque, later translating himself to the primary school. He passed the middle standard examination from D A.V. (Dayanand Anglo-Vernacular ) Middle School, Hoshiarpur, and his matriculation from Government High School in the same town. He joined the Forman Christian college at Lahore, but soon left it to enlist in the army (1919). He served at the Supply and Transport Corps Base Depot, Rawalpindi, and at the divisional office at Peshawar before he was attached to the Mesopotamia Expeditionary Force, Basra, in 1920 and later to the British Royal Army Pay Corps, also at Basra, in 1921.

There he had his thigh torn by a bullet shot and he was hospitalized. After recovery he was repatriated to India, but had been mistakenly reported dead to his family. This led to a dramatic situation. When he suddenly appeared at the door of his home in the village late one evening, he was taken to be a spirit and was refused admittance. As he was recognized the following morning at the doorstep of his house, the family's horror turned into jubilation .

Ganda Singh did not stay at home for long. He went back to Mesopotamia (now Iraq) and then to Iran, there to join the Anglo-persian Oil Company at Abadan as accounts officer. At Abadan, he came under the influence of the British scholar, Sir Arnold Wilson, who besides his official duties as general manager of the company was working on his Bibliography of Persia. Young Ganda Singh now aspired to prepare a bibliograplly of his native Punjab.

On his return to Punjab towards the end of 1930, he first worked on the editorial board of the Phulvari, a Punjabi monthly published from Lahore. One long-lasting friendship he picked up there was with Bhagat Lakshman Singh, a Sikh reformer and educationist He however missed meeting with Karam Singh, the historian, then very enthusiastic in promoting the cause of Sikh history. Karam Singh died before Ganda Singh could meet him.

In October 1931 began Dr Ganda Singh long and fruitful career as a researcher and historian. The Khalsa College at Amritsar placed him in charge of its newly-created Sikh History Research Department, which position he kept till 1949. During this period he travelled extensively, rummaging various public libraries, archives and private collections throughout India in quest of materials on Sikh history, enriching the library of his department and also brought out several books and tracts based on these.

In 1949, he came to Patiala where he was appointed Director of Archives and Curator of Museum under the Government of PEPSU (Patiala and East Punjab States Union). In 1950 he received the additional charge of Director of the Punjabi Department. His thesis on Ahmad Shah Durranl earned hiln the degree of Doctor of Philosophy from the Punjab University, Chandlgarh, in 1954, as well as much applause from scholars and historians Among them the counted Maulana Abul Kalam Azad, a leading Indian savant of the day.

Dr Ganda Singh was principal of the Khalsa College, Patiala, when he was invited by the Punjabi University, Patiala, to organize its Department of Punjab Historical Studies. He set up Punjab History Conference in 1965 which became a very active forum for the discussion of matters relating to Punjab history. In l967, he launched the University's journal, the bi-annual The Punjab Past and Present of which he himself was the editor and which gathered high repute and much prestige over the years.

He was secretary of the Committee for the History of Freedom Movement in PEPSU, Patiala, and chairman of the Regional Records Survey Committee for History of Freedom Movement, Shimla/Patiala, from November 1957 to December 1962. He held membership of Asiatic Society, Calcutta, Indian Institute of Historical Studies, Calcutta, Royal Asiatic Society of Great Britain and Ireland, London, and Itihas Sanshodhak Mandal, Poona.

He presided over the medieval section of Punjab History Conference session of the Institute of Historical Studies, Calcutta, held at Shillong in 1974 as well as over its 13th session held at Panaji (Goa) in 1975. In 1974, he presided the 35th session of Indian History Congress at Jadavpur.

Dr Ganda Singh was a prolific writer in addition to scores of research papers, booklets and pamphelets, he published over two dozen full-length volumes of high historical value. Dr Ganda Singh's magnificent work was widely acknowledged and lauded in his lifetime, and he received honours from a number of professional institutions and associations.

The Punjab Government invested him with the Award for literature on 31 March 1963 and the Shiromanl Gurdwara Parbandhak Committee, Amritsar, paid its tribute on 28 March 1964. On 19 December 1964, Muslim University, Aligarh, conferred on him the "degree of D. Litt. honoris causa." Sikh Educational Conference honoured him during its 52nd annual session held at Kanpur on 25-27 October 1974, and Punjabi University, Patiala, at the annual session of the Punjab History Conference held during November- 1976.

The University also brought out during the same year an anthology, Essays in Honour of Dr Ganda Singh, lovingly edited by his old pupil Professor Harbans Singh (author of the encyclopedia from where many documents have been published on this site). The University also awarded him the degree of Doctor of literature at its 15th convocation held on 25 February 1978. The Indian, history Congress during its Silver jubilee session held at Panaji (Goa) on 5-7 November- 1987 honored him as one of the five distinguished historians of India. The Government of India honoured him With the award of Padma Bhushan in 1983.

In the course of his long career as a researcher and scholar, Dr Ganda Singh had acquired a vast personal collection of rare books, maps, documents and manuscripts which occupied several rooms of his modest residence on the Lower Mall at Patiala. This Precious treasure is now the property of Punjabi University, Patiala, to which institution he donated the entire collection. Dr Ganda Singh died at Patiala on 27 December 1987.

4) History of The Gurdwara Shahidganj, Lahore, From its Origin To November 1935 Compiled From Original Sources, Judicial Records and Contemporary Materials

7) The Panjab in 1839-40: Selections from the Punjab Akhbars, Punjab Intelligence, etc. preserved in the National Archives of India, New Delhi 8) Importance Of Hair And Turban To The Sikhs - Dr. Ganda Singh Tract No. 396

9) Some Confidential Papers of The Akali Movement

11) The Sikhs and Their Religion

2) The Journal of Indian History

C) The arrest and release of Sardar Lahna Singh Majithia (1940)

D) Muslims Relics with the Sikh Rulers of Lahore (1943)

A) The Indian Society as Guru Nanak Found it - Dr. Ganda Singh

1) Social and Religious Movements in the Punjab in the Nineteenth and Twentieth Centuries - Dr. S.P. Sen (Ed.)

— Socio-Religious Movements in the Punjab in the Nineteenth and Twentieth Centuries - Dr. Ganda Singh

1) The Sikh Character and Sword