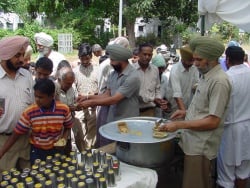 On June 16 every year, the Sikhs worldwide celebrate - yeah, Celebrate! - the great sacrifice of Guru Arjan, their fifth Guru. In 1601, after completing the construction of the beautiful Harimandir Sahib and then the successful compilation of the voluminous sacred Sikh text called the Adi Granth in 1604, the Guru taught the Sikhs the ultimate lesson - In 1606, the Guru by example showed the Sikhs the way and the manner in which to die in the name and in the Hukam (will) of God. Guru ji was the first Sikh martyr ever and by this event, the Guru set a precedence and an example for the people of the world. He demonstrated how one should lay down one's life without fear, with dignity, honour and how not to be intimidated by thugs and terrorists.

This extraordinary Man who gave Sikhi two of its greatest gifts ... the Guru Granth Sahib and the Harimandir Sahib ... was in the prime of his life, a mere 39 years old, when his spiritual activities were deemed a threat to institutionalized religion by the ruler of the land. Refusing to waver from his faith, he was tortured until his body succumbed.

Guru Arjan, on whose shoulders stands much of Sikhi as we know it today showed the world the ultimate way to tackle the terrorists head-on. And from his suffering were inspired many millions who understood his message and treaded the same spiritual path as him. Following in the Guru's sacrificial footsteps were many thousands of Sikhs who had learnt the lesson taught by the Guru and have walked in his path of self sacrifice for their commitment to truth and justice.

The Guru was the model and example for many thousands of Sikh martyrs who subsequently walked fearlessly and courageously to regain the country from the tyrannical rulers. The rule of law and justice was thus established but the blood of many thousands was spilt on to mother Earth to achieve this massive task.

For these martyrs, there was no promises of Heaven awaiting them on the other side or many comforts and maids in the after-world – The only reward was that the martyr was treading the path of love for the Lord and was prepared to accept His Will without doubt. The Guru Granth Sahib says: "If you desire to play this game of love with Me, then step onto My Path with your head in hand." (SGGS 1412) The Guru taught in real life how to stick to this path of righteousness or Dharam. People all over the world commemorate this event in many different ways. Many Gurdwaras will have Kirtan darbars or Akhand Paaths or Langars, etc., but here is an account of a special Indian twist to these celebrations.

Enjoying the drink of kacchi lassi

So, how do these Indian Sikhs commemorate the Guru's martyrdom?

Well, here's what they have never done, and still don't do:

We have never been bitter.

But here's what we indeed do:

It brings no medals, no awards, no certificates and no media coverage.

It's done for the sheer joy of it all; year after year; century after century.

This is how we, the Indian Sikhs, celebrate - yes, CELEBRATE! - Guru Arjan's great sacrifice.

It is simple. It captures everything that Sikhi offers. There is no greater glory.

This is how we remember this Mard Agamra - The Ideal Person - who did so much that we enjoy today.

Arjan was born at Goindval in 1563 to Bhai Jetha (who later came to be known as Guru Ram Das, the fourth Nanak) and Bibi Bhani.

Though the "baby" of the family, he was deeply spiritual. Impressed by his true piety, Guru Ram Das named him the next Guru. He took the mantle at the young age of 18, when the former shed his mortal coil.

Guru Arjan was a walking institution; in the ensuing 23 years of his life, he led the still-nascent community into maturity.

He began and completed the construction of the Harmandar Sahib in the middle of the Amritsar sarovar. At the commencement of the project, he did something revolutionary: he asked Sayeen Mian Meer, a respected Sufi from Lahore, to lay the cornerstones of the new structure.

Guru Arjan also started and took to fruition the monumental task of compiling the authentic compositions of the preceding Gurus and fifteen Bhagats whose spirituality was in consonance with that of the Gurus.

The investiture of the new Granth in the new Harmandar took place in 1604, and Baba Buddha ji became its chief steward.

Guru Arjan was a poet, a linguist, and a musician, par excellence. He combined his talents not only in compiling the bani, but ultimately became its biggest contributor through as many as two thousand verses, which now comprise one-third of the Guru Granth Sahib.

He came to be known as Sacha Padshah, the True King, to his contemporaries.

All of this did not go well with the Mughal Emperor, Jahangir, and the clerics that surrounded him. 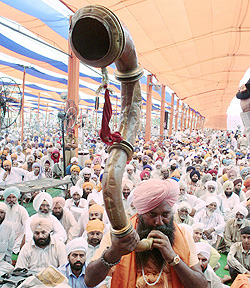 Jahangir wrote in his Tuzk:

"So many of the simple-minded Hindus, nay, many foolish Muslims too, have been fascinated by the Guru's ways and teaching. For many years, the thought had been presenting itself to my mind that either I should put an end to this false traffic, or he be brought into the fold of Islam."

Ultimately, Jahangir had Arjan taken prisoner to Lahore, where he was presented with a choice - his life or his Religion.

He was tortured over the course of several days, with hot plates, burning sand, and boiling water.

A Hindu official, Chandu, encouraged the Mughal. On the other hand, Sayeen Mian Mir offered to intervene. The Guru declined.

With "Sweet is Thy Will, O Lord ..." on his lips, he was taken to the River Ravi nearby.

"A dip in the river's cold water was more than the blistered body could bear", writes historian Gurbachan Singh Talib. "Wrapped in meditation, the Guru peacefully passed away."

A Jesuit, Father Jerome Xavier, who witnessed all these goings-on, in a letter he wrote from Lahore on September 25, 1606, says: "In that way their good Pope died, overwhelmed by the sufferings, torments, and dishonours."

Bhai Gurdas, the great poet, scribe and chronicler of Sikhi, described it thus:

"As fishes are at one with the waves of the river,
So was the Guru, immersed in the River of the Lord:
As the moth submits itself to the flame,

So was the Guru's light merged with the Divine.
In the extreme hours of suffering,
Aware was he of nothing but the Word Divine,
Like the deer who hears no sound
But the ringing of the hunter's bell.

Like the humming-bee who is wrapped in the lotus,
He passed the night of his life in a casket of bliss;
Never did he forget to utter the Lord's Word,
Even as the chatrik never fails to utter his cry.

To the man of God, joy is the fruit of devotion and meditation
With equanimity in holy company.
May I be a sacrifice unto this Guru Arjan!" [Varan, xxiv, 23]

The above article based on writing by T. Sher Singh also indebted to the historical essay on Guru Arjan by Gurbachan Singh Talib. 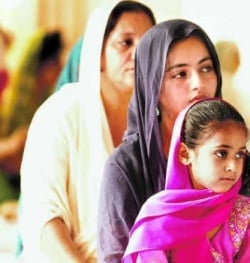 Devotees waiting to pay respects to the Guru

KOCHI: Sikhs in Kochi gathered at the Gurudwara Sri Guru Singh Sabha on Sunday to remember Guru Arjan Dev, the fifth guru, and the first guru to become a martyr.

His martyrdom for spreading the message of love to mankind was commemorated by singing religious hymns or kirtans for a week. The community gathered together every day singing kirtans in the evening and partaking in the langar (community lunch) prepared by the members of the community.

The management of the Gurudwara had arranged for Kirtan Jatta by a group from Raipur from Tuesday. The teachings of the Gurus were highlighted at the function held on Sunday. The programme concluded with a langar. Guru Arjan Dev, who compiled the Adi Granth or he Guru Granth Sahib, the holy scripture comprising the teachings of the Sikh gurus as well as Hindu and Muslim saints, was tortured to death.

His popularity as a saint who influenced people across religious barriers became his nemesis. After the death of Emperor Akbar, who was said to have praised the compilation of the Guru Granth Sahib, Guru Arjan Dev was imprisoned. He was also responsible for building the Harmandir Sahib, the Golden Temple at Amritsar, which is considered the highest spiritual seat of the Sikhs.