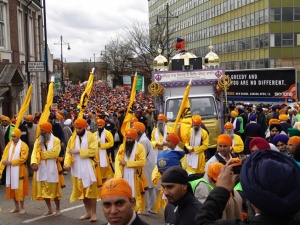 'Nagar Kirtan is a Punjabi terms which literally means "Neighbourhood Kirtan". The word "Nagar" means "town or neighbourhood," and "Kirtan" is a term describing the singing of Shabads (divine hymns). The term refers to the possession of Sikh Sangat (Congregation) through the town singing holy hymns. The concept of a Nagar Kirtan is to bring the message of God to the doorstep of the community. It is very common for Nagar Kirtans to take place wherever Sikhs live. They especially common during the month of Vaisakhi and take place all over the globe.

The Panj Piare (five beloved of the Guru) normally lead the procession of the Nagar Kirtan. This is normally followed by at lease one main float, which carries the Sri Guru Granth Sahib. In the float you have several Sewadars performing Kirtan and attending to the Guru. The Sangat walked behind Guru Ji and the Panj Piaare singing shabads and enjoying the glorious day. Food and drinks are sometimes served from stationary points or from other subsequent floats.

Everyone pays respect to the Sacred Sri Guru Granth Sahib Ji by bowing their heads and are presented with Prashad (sacred food) by the sevadars. The Nagar Kirtan is started when the Panj Pyara (5 beloved ones) walk in front of the Sacred Sri Guru Granth Sahib Ji. The Panj Pyaras are donned in their colourful Bana befitting the occasion. The five are almost always Amritdhari – baptised Khalsa Singhs.

The number 5 is very significant as it was on the day of Vaisakhi 1699 that our Tenth Guru Guru Gobind Singh created the order of Khalsa by baptising 5 volunteers from each corner of India and from different backgrounds. These 5 beloved ones ‘Panj Piyaras’ were given this reference by our 10th Guru Ji himself as they selflessly presented themselves at the call for their lives. It was these Panj Piyaras who amongst 80,000 stood up and entered the tent where Guru Gobind Singh asked for the head of his Beloved Sikhs. It was to everyone’s amazement that the Panj Piyaras came out of the tent alive and in glorious valour dressed in the 5 Ks, as they had the holy ceremony of Amrit Shakna performed by Guru Gobind Singh Ji.

Guru Gobind Singh gave much honour to the Panj Pyaras as they were the first Amritdhari (baptised) Singhs that our Guru Ji himself bowed to the Panj Pyaras and took Amrit (Baptism) from them. This was followed by the entire sangat (worshippers) participating in the sacred ceremony of Amrit Sanchar and when the Khalsa Panth for formed. Out of respect there are a multitude of sewadars who selflessly clean the roads before the Panj Pyaras and the Guru Granth Sahib is transported. It may be noticed that many in the possession may not wearing any shoes, irrespective of weather conditions – this is due to the respect they show to their holy Scripture, the sacred Guru Granth Sahib.

When participating in the Nagar Kirtan, one can find solace and peace even when thousands are walking with you. One can reach a state of Nirvana when indulging in the singing of Kirtan while following the Guru Granth Sahib. This is what the Nagar Kirtan is all about. There are young and old, Sikh, non-Sikh that follow the Nagar Kirtan route, stand on the sides and freely distribute refreshments to all alike. The Nagar Kirtan is concluded as the sacred Guru Granth Sahib re-enters the Gurdwara and the whole Sadh Sangat stands still for the Ardas (concluding Prayer). You may notice that many members of the Sadh Sangat take their shoes off on the streets while the Ardas is being read on the loud speaker – again this is purely a sign of respect of the holy Bani. It is also noticeable that the majority of the Sadh Sangat have covered their heads, this is a significant sign of respect to the presence of our sacred Guru Granth Sahib Ji. The colour Orange is in honour of the Khalsa Panth, as the Panj Pyaras are robed in Orange.