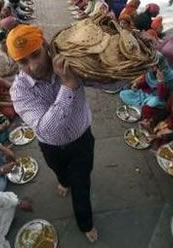 MUMBAI: During the chaotic aftermath of the Terror Attack many ordinary Mumbaikars came out on the streets to offer whatever help they could. One such group of young Sikhs worked relentlessly during last few days to offer food and water to security forces at Taj and Oberoi hotels.

About 20 to 25 young Sikh men, volunteering for Gurudwara Shri Dashmesh Darbar in Sion, saw the chilling pictures of the carnage on television and offered to help. With the help of women from the community, they set up a temporary Langar at several Gurdwaras in the suburbs and cooked food day and night.

"Once shri Guru Nanak Sahab had little money left in his pocket, but he used that money to serve food to the needy. We all draw inspiration from that incident. A Sikh's first duty is to serve the needy," said Ajit Singh, a volunteer who was serving food at Taj.

On Thursday and Friday, the volunteers supplied 500 packets of food to forces along with water. For lunch and dinner, 1000 packets of puri bhaji was prepared and served to forces at Oberoi and Taj.

This isn't the first time these men have offered help during crisis. During the serial blasts in city's local trains in 2006, the men helped police to pack dead bodies in plastic bags, and thereafter, immediately washed themselves and cooked food for the injured at the spot. "That was a completely different experience and one that changed our lives for ever," said another volunteer. At the Taj and Oberoi, the youth were also coordinating with the police to make sure everyone gets the food.