From SikhiWiki
(Redirected from Massa Rangar)
Jump to navigationJump to search 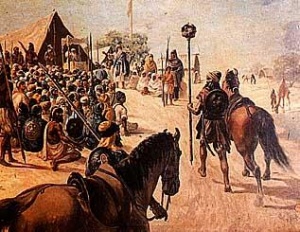 Sukha and mehtab singh bring the head of massarangar

Chowdhary Massa Rangar was traitor of Mandiali (also known as Mandiala, which is in Nakodar, Punjab), who desecrated the Golden Temple in 1740. He was put to death by Sukha Singh and Mehtab Singh. Chowdhary Massa Rangar of Mandiali was the most notorious and in charge of the Amritsar circle. He desecrated the Golden Temple by smoking and drinking inside there while watching dancing girls. Armed watchmen were posted around for his safety.

Zakaria Khan, irritated by the Sikhs' resistance and his failure to subdue them, obtained the orders from Nadir Shah to annihilate the Sikhs from Punjab. Accordingly, it was advertised that if a person helps to catch or kill a Sikh, he would be rewarded handsomely. To steal and rob from Sikhs was made legal. These orders of the government motivated many greedy people to become traitors. Cart-loads of severed heads of the Sikhs were sent to Lahore by such people to win government rewards. These traitors included Harbhagat Niranjania Chowdhary (a petty village official) of Majithia, Chowdhary of Naushehra Pannuan, and Chowdhary Massa Rangar of Mandiali.

When the Sikhs in Bikaner heard about the desecration of their holy place of worship they became very angry. Bhai Sukha Singh and Bhai Mehtab Singh decided to go to Amritsar and stop the desecration. When the Sikhs reached the Golden Temple they passed by the watchmen without anyone even lifting a finger against them. The watchmen assumed by seeing the "coin bags" that the two village collectors were going to the Chowdhary for depositing their money. When the Sikhs got inside the Harimandar Sahib the bags were put before Massa, who was drunk and watching the dances of the girls. When he bent to feel the "coins" in the bags, a sword fell like lightning and cut off his head which was picked up by the Sikhs. Before the people inside or outside the Temple could compose themselves and know what had happened, the Sikhs on their horses had vanished. The job was performed so successfully that it brought great shame to the administration and the police of Amritsar.