Living Guru for all 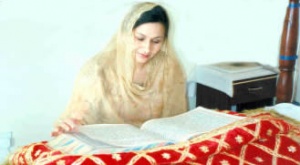 A Sikh woman reading the Sri Guru Granth Sahib, the Living Guru of the Sikhs.

A peaceful, happy and contented life has become elusive for the modernized person. Feelings of self worth, faith in the Omnipotent; unborn Creator; Saviour; kind, just Benefactor can be achieved by internalising the Guru’s word and hoping for His Grace. Through His Hukam, His love and glory, the purpose of life becomes crystal clear and as a by-product, we start getting satisfaction in life, begin developing insights and start using tools of practical wisdom. The Guru’s grace produces in human beings intensive elation, high level of well-being and higher and altered states of consciousness, awakened intelligence and re-appreciating of life through amazement.

Internalizing the Guru’s work makes a person return to humanity and humility. The Guru allows us to be free, to be ourselves, and to have worldly satisfaction, peace of mind and joy (Anand). The Guru expects us to challenge the status quo, take risks, follow the righteous path by replacing the following five evil vices of the mind:

The bani of Guru Granth Sahib urges us to implant positive thoughts, positive expectations and to reach positive results. For the Guru’s Sikh, the "cup is always half full, not half empty". The Guru’s followers are the givers, and believe in the saying, “Those who bring sunshine into the lives of others cannot keep it from themselves”. 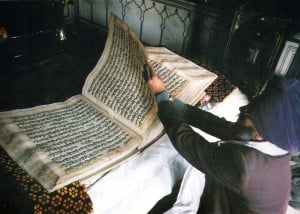 The Guru’s Sikh is intrinsically motivated. His compulsions take the form of selflessness. He has no difficulty in connecting with the needy, oppressed and less fortunate by prioritising his time over the self. The Guru’s Sikh is never consumed by anger or resentment. The Guru tells us never to wallow in self-pity and depression. Chardikala is the way forward for a Sikh of the Guru. The Guru expects us to lead the life of a householder and give unconditional love to all. The Sikhs is expected to make responsible commitments and challenge their abilities in sewa.

Excessive self-preservation and self-enhancement according to the Guru’s bani produce myopic neurosis and a very selfish view of life. The Guru expects his Sikhs to “decentre”, so as to develop increased awareness, empathy and divergent perception in interpersonal relations. The bani teaches us to be flexible and to “reframe” our life, according to His hukam. The Guru does not want us to give up the world because of its randomness. By using adaptive strategic, the Guru expects us to find out how the world works and how to change it while living in harmony with it.

The Guru’s Khalsa fight oppression wherever they see it; if you do not - you become a participant yourself, which is totally against the teachings of Sikhism. If life is a game, the Guru’s Sikhs will be players. If life is a parade, the Guru urges us to march and not be silent spectators. The Guru’s Sikhs bring devotion and dedication to life. He toils with the conviction that every dehumanising condition does pass if challenged, and one’s deepest despairs vanish over time. Joyous struggle using inner resources makes Sikhs look at events as possibilities.

A Guru’s Sikh firmly believes that the present life is not a dress rehearsal; this is it! The Guru urges us to live honest and upright lifes once, then, once is enough! Dhur-ki-Bani ("Bani from the Ethernal") urges Sikhs to be optimistic; stay energized, almost feeling immortal for the Guru’s work; develop inner peace, calmness, steadiness, adaptivity; and stay connected to Him with spiritual faith. It is a known fact that strength derived out of faith gives Super-energy - a “quantum leap” comes from repetition of Naam and singing His bani in the company of the sangat.

A Sikh always lights a candle rather than cursing darkness. A Sikh does not worry about us-them-me-it, but cognitively connects with people at a universal level. A Sikh believes that the body is the temple where the soul lives. Punishing it does not produce nirvanic forces. Nirvanic forces are produced by controlling ego, pride, vanity, greed, jealousy, wealth, ill-will, cruelty, hypocrisy, backbiting, dishonesty, and selfishness.

In Part II is given the actual quotations from Guru Granth Sahib from which Part I has been developed.

The world is like an ocean that can be crossed with the grace of the Guru.

Whoever wins His Grace merges in Naam.

By the Guru’s grace, one mind is attuned to Naam, And one is awakened from the number of ages.

O my mind, the person whom the Guru enlightens, He remains a householder without being attached, He leads a life of truth, of right actions and controlled desires.

With mind intent upon one Lord who is within and without and by the Guru’s grace, the fire of desires shall be extinguished.

They on whom the Master casts His glances of Grace, Toil with
patience at their craft as smiths, Chastity of though, speech and
deed is their furnace, Understanding is the anvil on which they
shape it out; Divine word serves as hammer for those toilers at
life. With the fire of sufferings and bellows of God’s fear,
They make the heart of love, The vessel in which melts the gold
of Naam, True is this mint where man casts and recasts his being,
In the image of God.

Blessed is the heart that touched by Grace vibrates with Naam.

Action may earn you a birth, but emancipation is obtained by His Grace.

If a hundred moons were to come out, and a thousand suns to rise;
In spite of all this illumination, all would be pitch-dark
without the Guru.

based on article by Dr. S.S. Sodhi