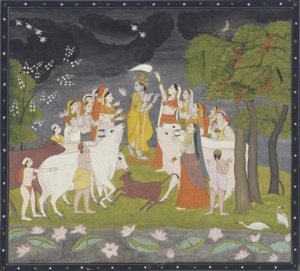 The tenth Sikh Guru, Guru Gobind Singh in the Dasam Granth has written a section of Bani called Chobis avatar. This is the seventh Bani in the second holy scriptures of the Sikhs. The Chobis avatar, a collection of tales of the twenty-four incarnations of the demi-god Vishnu, forms a part of the Bachitra Natak. The complete work contains a total of 4,371 verse units of which 3,356 are accounted for by "Ram avtar" and "Krishna avtar". The shortest is Baudh Avatar (The Buddha) comprising three quatrains, and the longest is Krishn avtar, with 2,492 verse units, mostly quatrains.

This a collection of tales of twenty-four incarnations of the Vishnu, and forms a part of Bachitra Natak, in Guru Gobind Singh's Dasam Granth. The complete work contains a total of 4,371 verse units of which 3,356 are accounted for by Ramavtar and Krishnavtar. The shortest is Baudh Avatar (The Buddha) comprising three quatrains, and the longest is Krishnavtar, with 2,492 verse units, mostly quatrains.

The introductory thirty-eight chaupais or quatrains refer to the Supreme Being as unborn, invisible but certainly immanent in all objects. Whenever evil predominates, saviours of humanity (avatars) emerge by His hukam (order), to re-establish righteousness. They fulfil His will and purpose. Akal Purakh who creates them ultimately subsumes them all in himself. The poet asserts his monotheistic belief here and while enumerating the avatars discountenances any possibility of their being accepted as the Supreme Being, i.e. Akal Purakh.

The poet asserts that he, having descended from the martial Ksatriyas, cannot think of adopting the attitude of a recluse towards the disturbed conditions of his time. The greater part of the tales of Ramavtar and Krishnaavtar are taken up with battlescenes evoked through many alliterative devices with the clash and clang of arms constantly reproduced. At the close of Krishnavtar, in a kind of postscript, is proclaimed the crusader's creed, which is ever "to remember God, to contemplate holy war; and, unmindful of the destruction of the perishable body, to embark the boat of noble repute." The poet has thus extracted the element of heroism from the prevalent stories without projecting the attitude of a worshipper, with the sole purpose of inspiring his followers with the resolve to fight for Dharma, i.e. to uphold righteousness.

Sudama, a poor brahman, was known to be a friend of Krishna from childhood. His brahmin wife always pestered him as to why he did not go to Lord Krishna to alleviate his poverty. He was perplexed and pondered over how he could get re-introduced to Krishna, who could help him meet the Lord. He reached the town of Duaraka and stood before the main gate (of the palace of Krishna). Seeing Sudama from a distance, Lord Krishna, bowed and leaving his throne came to Sudama. First he circumambulated around Sudama and then touching his feet he embraced him. Washing his feet he took that water and made Sudama sit on the throne. Then Krishna lovingly enquired about his welfare and talked about the time when they were together in the service of the guru (Sandipani). Krishna asked for the rice sent by Sudama's wife and after eating, came out to see off his friend Sudama. Though all the four boons (righteousness,wealth,fulfillment of desire and libereation) were given to Sudama by Krishna, Krishna's humbleness still made him feel totally helpless.