From SikhiWiki
(Redirected from Karra)
Jump to navigationJump to search

Kara - one of the five articles of faith for the Sikhs 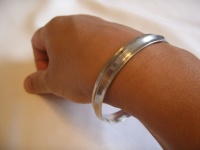 Kara - Sikhs normally wear it on the right arm

The Sikhs were commanded by Guru Gobind Singh at the Baisakhi Amrit Sanchar in 1699 to wear a steel slave bangle called a Kara at all times. This was one of five articles of faith, collectively called Kakars that form the external visible symbols to clearly and outwardly display ones commitment and dedication to the order (Hukam) of the tenth master and become a member of Khalsa. The Khalsa is the "Saint-Soldier" of Guru Gobind Singh who undertakes the following: "He does not recognize anyone else except One Lord, not even the bestowal of charities, performance of merciful acts, austerities and restraint on pilgrim-stations; the perfect light of the Lord illuminates his heart, then consider him as the immaculate Khalsa." (Guru Gobind Singh in the Dasam Granth page 1350)

The Kara is to constantly remind the Sikh to always remember that whatever he or she does with their hands has to be in keeping with the advice given by the Guru. And this advice can be summed up in this line from the SGGS, the Sikh holy scripture: "In the tenth month, you were made into a human being, O my merchant friend, and you were given your allotted time to perform good deeds." (SGGS page 76)

The Kara is a constant reminder of the Sikh's mission on this earth and that he or she must carry out righteous and true deeds and actions in keeping with Gurbani. The Kara is usually worn on the right hand although this has not been stipulated by the tenth Guru.

Bhagat Kabir reminds the Sikh to always keep ones consciousness with the Lord thus:

"With your hands and feet, do all your work, but let your consciousness remain with the Immaculate Lord. ||213||" (SGGS page 1376)

Read Sakhi about Guru Gobind Singh and the kara

Where to buy a Kara online